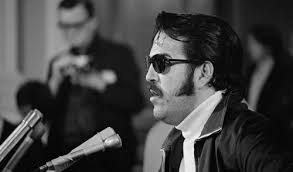 1 Joseph (Joe the Animal) Barboza – A famed and incredibly-feared hit man and enforcer for the New England mafia, Barboza was killed walking to his car outside his Bay Area apartment while in hiding in San Fransisco on February 11, 1976. It has been long-rumored that he was shot-gunned to death by Eastside Boston gangster Joseph (J.R.) Russo, dispatched from Massachusetts to clip the “cowboy” Portuguese strong arm who testified against his mob superiors – most notably crime family namesake, Raymond Patriarca – in court years earlier. Joe the Animal was the first person to ever enter the Federal Witness Protection Program and lived under another identity (Joe Donati) in California for several years, interspersed with a four-year prison sentence for a murder he committed in the Program, prior to being tracked down via an associate of his who contacted Patriarca underboss Jerry Angiulo and divulged Barboza’s whereabouts, setting him up for his pending slaughter.

2 Teddy Deegan – Probably the most infamous mob murder that actually took place in the Boston area, Deegan, a small-time hood that ripped off a mafia-backed bookie for $40,000, was found shot to death in a Chelsea, Massachusetts alley on March 12, 1965. Deegan’s slaying is historically significant more for its aftermath than the actual hit itself. After Joe The Animal Barboza flipped in 1967, he implicated fellow Boston mobsters Louie Greco, Peter (The Crazy Horse) Limone, Henry (The Referee) Tameleo and Joseph (Joe the Horse) Salvatti in killing Deegan, with Grecco being the shooter and the other three helping orchestrate the homicide. Thirty years after the four Mafiosi were convicted and sentenced to death (none carried out), they were all exonerated when it came out that Barboza had lied about their roles to protect himself and his buddy and fellow muscle-for-hire Vincent (Jimmy the Bear) Flemmi, the real culprits in the hit, and the FBI knew about it and covered it up. Tameleo, New England Godfather Raymond Patriarca’s consigliere and Greco, who wasn’t even in the state of Massachusetts at the time the murder occurred, died in prison prior to their exoneration. Limone, thought to be New England’s current reigning mob don, and Salvatti, were released and eventually, along with members of Tameleo’s and Greco’s families, were rewarded over 100 million dollars in punitive damages from the government.

3 The “Consolidation Murders” – Legendary Boston mob don, Phil Buccola (1924-1954), consolidated power for the city’s Italian mafia by ordering the murders of Irish mob chief, Frank Wallace and Jewish Godfather Charles (The King) Solomon in the same 13-month span, assuming complete control of the Beantown underworld for the next 25 years. Wallace was called to a purported sit-down at C.K. Importing Company, the headquarters of Buccola’s underboss Joseph (J.L.) Lombardo and ambushed by gunmen alongside his No. 2 in charge, Bernard (Dodo) Walsh, as they walked through the door. Solomon was gunned down in the bathroom of Boston’s Cotton Club on January 24, 1933 by a pair of Wallace’s former Southie lieutenants, at that point employed by Buccola and Lombardo.

4 “The Cadillac Frank Hit Parade” – Following Francis (Cadillac Frank) Salemme being installed as New England’s Godfather in 1991, he went on a suspected killing spree, reputedly ordering the murders of at least a half-dozen local underworld figures he speculated were part of an offshoot faction of the Boston mob that tried to assassinate him two years prior in a power-grab that came on the heels of his release from prison and meteoric ascension through the ranks. Howard Ferrini (August 16, 1991), Bobby Donati, (September 1991), Barry Lazzerini, (October 3, 1991), Rocco Scali, (October 1992), Vincent Arcieri (December 1992), all showed up dead in the first 16 months of Salemme’s tenure as don.

5 Jimmy Bratsos – A Greek wiseguy that fell out of favor with Boston mob administrators, Bratsos was rubbed out on March 21, 1954, disappearing, never to be heard from or seen again on his way to a meeting with then-up-and-coming North End gangster Larry Zannino. Eventually rising as high as consigliere in the Patriarca Crime Family, the heavily-feared Zannino is alleged to have “made his bones” with the Bratsos’ slaying. Informants told police that Bratsos, whose younger brother would die in similar fashion 12 years later, was shot in the back of the head when he came to meet Zannino at a bar in the Syrian section of Boston (today Chinatown) and then possibly buried at Zannino’s family farm in Stoughton, Massachusetts.