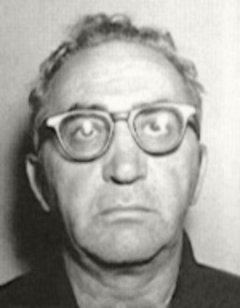 Buffalo mob enforcer Daniel (Danny Boots) Sansanese was famous for his lethality on the streets of Western New York. He was the Magaddino crime family’s No. 1 hit man from the late 1950s until his incarceration in 1971 (he died of cancer four years later).

The FBI believes in that capacity Danny Boots either personally carried out or organized the details for the following gangland homicides from the Greater Buffalo area during that time.

March 3, 1958 – Buffalo wiseguys Guido D’Antuono and Leo Bartolomei, who both operated out of the Niagara area, disappeared after traveling by plane to New York City for a meeting.

September 13, 1958 – Renegade Buffalo mobster Frank (Frankie the Stick) Aquino is found dead inside his mother’s Lincoln convertible in Lackawanna, New York. Frankie the Stick’s body was crammed into the dashboard of the automobile. Aquino and his brother “Freddy the Fox” headquartered out of The Bison Hotel and were refusing to share profits from their rackets with the Magaddino crime family.

September 17, 1958 – Renegade Buffalo mobster Fred (Freddy the Fox) Aquino is found murdered in a Tonawanda, New York field. He had disappeared the previous day after his brother’s funeral and his body showed signs of torture (his face and chest burnt with acid). The Aquino brothers were half Irish and Freddy the Fox was known as a ladies man.

October 14, 1958 – Buffalo mob collector Arthur (Artie Bricks) DeLuca is found shot and strangled to death with an electrical cord in the trunk of his Cadillac in North Tonawanda. DeLuca did muscle work for the Aquino brothers.

May 23, 1959 – Buffalo mob figure Richie Battaglia is shot to death getting into his car in Reynolds Alley. Battaglia was affiliated with

August 8, 1961 – New York mob associate William (Shorty) Holmes is gunned down in the Bronx following a drug bust alongside members of the Magaddino clan in Buffalo.

October 8, 1961 – Buffalo mob soldier Albert (The Baker) Agueci is found beaten and tortured to death in a field near Rochester, New York. Facing a narcotics trafficking case, Agueci, who was being openly subversive to his bosses in the crime family, disappeared on his way to meet Don Stefano Magaddino.

April 20, 1963 – Buffalo wiseguy Lou Scalzo is gunned down in his driveway. Scalzo was refusing to pay tribute to the Magaddinos.

September 22, 1965 – Buffalo mob associate Charles Gerass is shot to death, his trussed body was found in the trunk of his new-model Cadillac parked at the Sheridan Plaza shopping plaza. Gerass was on his way to meet Magaddino crime family capo Joseph (Lead Pipe Joe) Todaro.

December 29, 1969 – Colorful Niagara Falls attorney Jimmy LiBrize is killed and tortured in the living quarters behind his law office. Some claim it was a mafia hit. Others point to a client upset over LiBrize’s handling of his divorce case.

June 11, 1970 – Buffalo mobster Gino Albini is shot to death in his driveway just days after he murdered a girlfriend of his he worried was about go to the police regarding her witnessing him kill a fellow bar patron in a fight at the Ivanhoe Inn the prior Thanksgiving.

May 12, 1971 – Buffalo mob associate Lester Speaker is shot to death and dumped by a set of railroad tracks.