Boosting The Underboss: Detroit Mob No. 2 Man Victim Of Robbery Amidst His RICO Trial Back In 2002 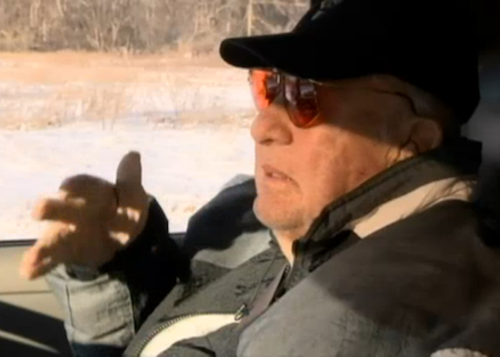 The brazen robbery of Detroit mob underboss Anthony (Tony Z) Zerilli’s house in the summer of 2002 when Zerilli and his wife were sitting in court at his racketeering trial netted over six figures in cash and jewelry from the family vault, which was hauled out of the residence and cracked open at an off-site location nearby, according to exclusive Gangster Report sources. However, who exactly pulled the daring home invasion and theft is still a mystery today. No charges were ever filed in the crime. The statute of limitation has since lifted.

Zerilli, 87, died of natural causes last year. He was one of 17 co-defendants in the groundbreaking Operation GameTax case, an expansive RICO indictment that sent the majority of the Detroit mafia’s administration to prison and dropped in Michigan federal court 20 years ago this month (March 13, 1996). Most of Zerilli’s Operation GameTax co-defendants stood trial in the late 1990s, however the longtime Motor City mob chieftain didn’t reach the courtroom until July 2002. He was in the national headlines back in 2012 and 2013 for trying to take the FBI to Jimmy Hoffa’s remains.

On the afternoon of July 26, 2002, with Zerilli away attending his trial in downtown Detroit, his suburban Sterling Heights, Michigan home was broken into and burglarized. Jewelry with an estimated worth of roughly $100,000 and another $150,000 to $250,000 in cash was pilfered in the high-profile heist, according to police informants. The perpetrators themselves, the men that actually pulled the job, weren’t connected to Zerilli, but those who put them up to it were, per sources. Zerilli issued a bounty on the robbers’ heads (including the one who made a series of calls to the prison-bound underboss to goad him about the embarrassing boost of his money and ice) that was never carried out.

The jewelry taken in the burglary was all of the “flawless” variety, said one source, karat-heavy diamond encrusted watches and rings, gold-plated bracelets and glittery, gem-lined necklaces and dozens of sets of gaudy, custom-engraved cufflinks. Several sources say the Zerilli house security system was outdated and easy to overhaul and that the residence was left in disarray, with the actual moving the safe out of the home leaving large marks on the wall: per one source, the safe got stuck as it was being removed.

Some speculated the robbery was the first domino to fall in a systematic siege on Zerilli’s turf by his cousins and fellow Operation GameTax co-defendants Giacomo (Black Jack) Tocco and Anthony (Tony T) Tocco. Zerilli and the Tocco brothers were raised together as Motown mob princes, their dads being Giuseppe (Joe Uno) Zerilli and Vito (Black Bill) Tocco, the Detroit mafia’s “founding fathers.” Jack Tocco, the syndicate’s boss from 1979 until he was felled by heart failure in July 2014, was convicted in Operation GameTax and did a controversially-light two years behind bars. His baby bro and then-consigliere Tony Tocco was Zerilli’s brother-in-law and the only defendant in the case found not guilty by the jury. Both Toccos went on trial in the spring of 1998 and were openly beefing with Zerilli in the wake of the bust two years earlier.

Childhood best friends, Tony Zerilli and Jack Tocco died no longer on speaking terms, their final face-to-face meeting in 2011 erupting into a physical altercation broken up by Tocco’s son, according to sources in the Tocco camp. Tocco surpassed Zerilli on the fast track to the don’s throne in the 1970s while Zerilli, the crime family’s then-acting boss, served time in prison for holding hidden ownership in and stealing six million dollars from the Frontier casino and hotel in Las Vegas.

The relationship was strained, yet remained civil. Zerilli accepted Tocco’s invitation to be his second-in-charge upon his release from the can and was provided pretty-much unchecked authority in overseeing his own faction of the Family. After the 1996 indictment landed, the tie that at one point in time seemed forever bound was officially broken. Tocco blamed Zerilli for Operation GameTax – it was Zerilli’s crew that was infiltrated by FBI wires and Zerilli’s nephew and co-defendant, Nove Tocco, who became the first Detroit mafia soldier to enter the Witness Protection Program in 2000.

In December 2012, Zerilli went to the FBI and told them he was informed that famed labor leader Jimmy Hoffa was executed and buried on farm property located in Oakland Township, Michigan owned by the Tocco brothers on July 30, 1975. Zerilli was in prison on the Frontier conviction the day Hoffa vanished. A dig of the property in the spring of 2013 came up empty. The Toccos were two of the original suspects in the notorious kidnapping and slaying.

Zerilli was found guilty in Operation GameTax on July 30, 2002, four days after the burglary of his house. The subsequent weeks saw his bodyguard murdered and his No. 2 slot in the crime family reassigned to Vincent (Little Vince) Meli. Zerilli’s camp contends Zerilli retired, those in the Tocco camp claim he was demoted.

Less than two weeks later, Zerilli’s then-protégé and driver Jerome (Jerry the Blade) Bianchette was killed. The 31-year old Bianchette was slain on the evening of August 10, 2002 at a Macomb County construction site, shot-gunned to death as he got out of his car to attend what he thought was going to be a late-night meeting with underworld associates he felt owed him money, according to police records related to the investigation which remains open today.

These same records show that informants told the FBI that Bianchette was Zerilli’s choice to oversee his collections on the street while he was “away at school” and that in the months that followed his violent demise the Tocco brothers scooped up territory long belonging to Zerilli, “gambling, loansharking, shakedown routes and more.” One of the suspects in the Bianchette hit is admitted Jack Tocco friend and reputed lieutenant Louis (Butch) Stramaglia, said to be feuding with Bianchette regarding a drug-deal that Bianchette felt Stramaglia owed him money from, per law enforcement inter-office memos acquired by Gangster Report.

Stramaglia was a suspect in a pair of murders (one the intentional drug overdose of his brother, the other the posed-as-suicide murder of a business associate and drug dealer six weeks after) from the late 1980s – fallout from a racketeering case he was looking at in Florida and its’ investigation that was extending to Detroit -, but never faced charges in either. Stramaglia was convicted in the Florida case (stealing 2 million bucks from a state-sponsored construction contract to build an expressway), however had the charges tossed in 1993.

The week he died, Bianchette had a personal protection order filed against him for threatening a Zerilli debtor with a knife, was called to a sit down with Detroit mob administrators and told to “quiet down,” and got into a small verbal spat with then-street boss, today-boss Jack (Jackie the Kid) Giacalone, the day after the sit down at a local bar, per exclusive GR sources. Bianchette was introduced to Zerilli in the 1990s through his then-son-in-law and alleged button man Eugene (Genie Boy) Baratta and Baratta’s sons, his grandsons.

One theory explored by investigators is that Bianchette set the robbery of the Zerilli house in motion and that his murder didn’t come from Tocco, but Zerilli, in retaliation. It’s unknown how much traction this theory got with the authorities.

Other theories explored by law enforcement in the Zerilli job were: (1) that non-Tocco rivals masterminded the heist, (2) either non-Tocco blood family of Zerilli’s or crime family members and associates who had knowledge of the Zerilli home did it, (3) that a group of the Outlaws biker gang on unfriendly terms with him from dealings with Bianchette and lingering issues and animosities going back to the early 1990s and a murder contract the Zerilli crew had gotten to rubout Outlaws International President Harry (Taco) Bowman, might have wanted a piece of Zerilli when they perceived he was at his weakest.