On February 25, 1985, Salerno and eight other New York bosses  were indicted in the Mafia Commission Trial, the most important criminal prosecution of organized crime in United States history. The trial started in September 1986 and lasted three months. In October 1986, Fortune Magazine named the 75-year-old Salerno as America’s wealthiest and most powerful gangster. Many observers disputed Salerno’s top ranking, claiming that law enforcement  exaggerated Salerno’s importance merely as an offensive tactic for the Commission trial.

Salerno’s bail request was denied and his attorneys appealed the decision all the way to the Supreme Court. However, in United States v. Salerno the Supreme Court ruled that he could be held without bail because of his potential danger to the community.

One of the primary witnesses in the Commission trial was that of Vincent Cafaro.  When Vincent “The Fish”  was a young wannabe gangster, he was busted for possessing two ounces of heroin. His family called on Mafia member Anthony “Fat Tony” Salerno for help.

“Fat Tony took me aside and gave me some advice: Leave the junk alone. If you need money, go out and steal,”  Cafaro said.

“I was never asked to carry out a hit – I never had to kill anyone. That’s because Fat Tony always looked out for me – it was like a father-son relationship,” Cafaro said.

Cafaro, before being indicted and turning into a “rat” for the FBI, was Salerno’s right-hand man, running part of the numbers business for him in Harlem.

“I had some bad years, but in a good year I could make as much as $2 million or more,” said Cafaro. “Whatever money I took, I split 50-50 with Fat Tony. Later, I expanded my businesses from numbers into sports betting.” 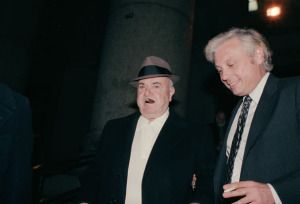 On November 19, 1986, Salerno was convicted on RICO charges. The following January, he was sentenced, along with his 6 co-defendants, to 100 years in prison.

While awaiting the Mafia Commission trial, Salerno was indicted on March 21, 1986 in a second federal racketeering indictment, among other charges, Salerno was accused of illegally helping Roy Lee Williams to win the national presidency of the Teamsters Union.

Wiretaps in this case show Anthony Salerno  expressing exasperation at the news  that Teamsters President (at the time) Jackie Presser was an FBI informant.

“These . . . Chicago guys are going to knock my brains in,” Salerno declares on one tape, noting that he had successfully opposed the Chicago Mafia’s plans to kill Presser after a similar report appeared in 1981.

In a March 6, 1984, recording, Salerno asks an associate, Carmine De Angelo, about Presser’s health and De Angelo responds that he is well. De Angelo, head of a Teamsters-related New York union, tells Salerno he telephoned Presser about an accusation that the Teamsters were trying to “raid” members of the Typographical Union, but that Presser refuted the charge.

Later in March, 1984, De Angelo tells Salerno, “Jackie Presser maybe next week,” apparently meaning that Presser may be available for a meeting, according to another tape.

“Is he still sick?” asks Salerno.

Later, on a June 6, 1984, tape, Salerno expresses exasperation at a disclosure in The Times, attributed to unnamed federal officials, that Presser has been an FBI informant since the 1970s on organized crime operations.

“Did you read in the papers that Jackie Presser is a stool pigeon for the government?” Salerno asks an associate. “I think these . . . Chicago guys are going to knock my brains in.”

Salerno explains on the tape that in 1981, when a similar report without any attribution was published in the Cleveland Plain-Dealer, he contacted his New York attorney, the late Roy M. Cohn, and Cohn got the newspaper to publish a front-page retraction of the story.

“So I sent the . . . paper to Chicago,” Salerno continues on the tape. “Now it comes out that he’s a stool pigeon again. . . . I can’t understand it. Why would he want to squeal on the Teamsters guys?”

Now, when I heard this, this morning–here I am sticking up for the . . . guy,” Salerno went on, according to the tape. “I just got through sending a couple of guys over there for what he’s doing, right?”

Salerno was convicted in 1988 and sentenced to 70 years in prison. 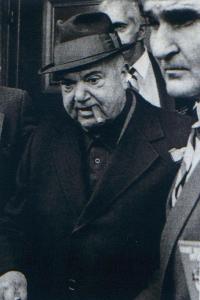 Fat Tony Salerno | Prison and death
After his conviction and imprisonment, Salerno’s health rapidly declined; in July,1992 he died of a stroke at the Medical Center for Federal Prisoners in Springfield, Missouri.

On a wiretap at a mob hangout, Federal agents once recorded Salerno bemoaning a disrespectful young gangster who had called him “Fat Tony” to his face.

“If it wasn’t for me, there wouldn’t be no mob left,” Salerno said. “I made all the guys.”

Not long after being sentenced to 100 years in prison, Fat Tony penned this letter to a journalist,

“I am familiar with the foibles of RICO It is a congressional enactment that is a prime example of the seldom used term juxtaposition incongruity. It is a plaything for frustrated drama actors such as U.S. Attorney Giuliani and his stand-in Assistant Chertoff. For actors they are, the jury box, the audience for their courtroom histrionics.

For what else can it be called when a 76-year-old man who has never been convicted of anything but a tax violation is portrayed as a murderer and worse and receives a 100-year term for RICO extortion.

What is a 100 years sentence to a 76-year-old man? A death sentence, even though the Constitution of this country allegedly forbids such a sentence for a non-capital offence.

When this government has (under the guise of RICO) placed all the bad guys of Italian extraction in prison, who will be next?

History repeatedly shows us that a government that relies on unprincipled abuses of authority and dubious laws has a tendency to snowball into worse scenarios. The same jurors who most shamefully allowed these RICO convictions may one day find themselves at the defendants table for nothing more sinister than belonging to the Palma Boys Social Club or the White Plains Civic Ladies Sewing Club.