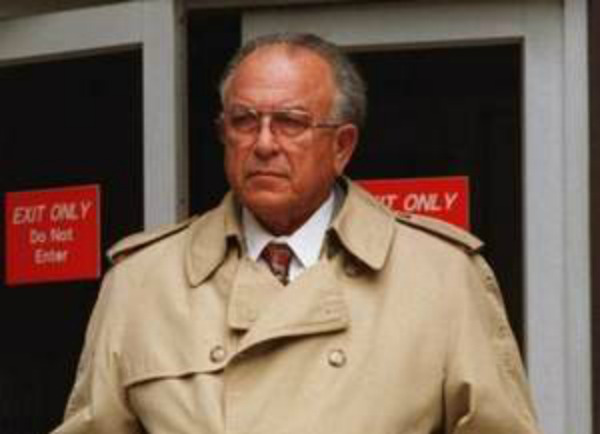 Undercover-sting operations launched against the Detroit mafia over the years have met varying degrees of success, none delivering the near-deathblow to the organization like you saw in New York in the 1980s with the Bonanno clan in the well-chronicled Donnie Brasco affair (see Johnny Depp, Al Pacino movie from 1997 of the same name).

In the early 1960s, longtime Tocco-Zerilli crime family street boss Anthony (Tony Jack) Giacalone and syndicate soldier Vincent (Crazy Jimmy) Finazzo were bit by undercover operations undertaken by the Detroit Police Department and the FBI, respectively. Giacalone had the charges dropped before he reached trial. Finazzo wasn’t so lucky and was convicted, forced to do prison time.

Investigating a mob-backed police payroll, the DPD internal affairs unit sent sergeant, James Thomas undercover as a young copper looking to pad his pocketbook on the mafia’s dime. Through an intermediary, Thomas set up a meeting at a local coffee house with Giacalone, the face of the Detroit mafia during the entire second half of the 20th Century. Wired for sound when he arrived, he caught Tony Jack on tape offering him $50 a week “to look the other way” and bragging “Yeah, you know about Tony Giacalone.”

Giacalone scuffled with police as they arrested him on bribery charges stemming from the sting in 1963 at his Home Juice Company headquarters. The Home Juice Company (eventually bought out by Everfresh) Detroit franchise was won by Giacalone and his younger brother and fellow mob caporegime, the equally feared and respected Vito (Billy Jack) Giacalone, in a late-1950s dice game. Tony Jack’s bribery charges were tossed out of court in 1964, according to his FBI file, via a payoff to the judge delivered by none other than Teamsters union boss Jimmy Hoffa.

The Giacalone brothers were the top suspects the following decade in Hoffa’s still-unsolved disappearance and murder. Tony Jack died of kidney failure in 2001. Billy Jack passed away from natural causes in 2012. Both were prime targets in seemingly-countless mafia-related slaying probes, however always skirted any homicide indictments.

Despite receiving his button at a young age, Crazy Jimmy Finazzo was, well, crazy. He was notorious for sleeping with jailed wiseguy’s wives and girlfriends and brawling in bars and nightclubs at the slightest perceived slight. Before his 30th birthday, he had picked up pinches for assault and battery, armed robbery and disturbing the peace. The involvement he and his father’s crew had in the drug business led to their being zeroed in on by the FBI

Per Michigan State Police records, Finazzo was responsible for looking after interests in the narcotics rackets for his dad and his dad’s gangland partner, Raffaele (Jimmy Q) Quasarano. Little Sammy co-owned the Motor City Boxing Gym with Jimmy Q, the right-hand man and protégé of then-Detroit mob consiglieri and international drug baron Giovanni (Papa John) Priziola. The younger Finazzo, according to MSP files, acted as a point man for his father, Quasarano and Priziola and their liaison with the crime family’s Windsor, Canada crew. Windsor directly borders Detroit and has always been a central entry point for contraband being smuggled into the United States as far back as Prohibition.

The FBI sent an undercover agent into Finazzo’s crew. The government agent got introduced into the crew and to Crazy Jimmy Finazzo specifically by Little Sammy Finazzo’s driver and bodyguard, a retired boxer named William (Billy Gloves) Gutzi, sometimes just called Billy Gutz, who he had been able to convince that he was an aspiring mobster looking to score in the drug game. Ingratiating himself into Crazy Jimmy Finazzo’s inner-circle, the undercover cop, ended up busting the baby Goodfella, but not the daddy – the younger Finazzo was indicted and convicted in 1960 in a marijuana conspiracy case and served three years behind bars.

FBI agent Bill Randall went undercover into the Detroit mob’s Capital Street Social Club crew, working his way to the outer fringes of the non-Italian regime, but never really making much further headway. The Capital Avenue Social Club crew was led by Frederick (Freddie the Saint) Salem and Allen (The General) Hilf and ran the Giacalone brothers’ gambling activities. Salem was Lebanese and Hilf was Jewish. Randall’s undercover work led to the raid and arrests of the Capital Social Club crew in a 1978 bust of one of the crew’s famous floating backdoor betting parlors.

“The mob in Detroit is as tightknit as they come, I could never truly get in with those guys, even the non-Italians like Freddie and Allen, are very weary of outsiders,” Randall recalled. “You could only get so far until they stopped trusting you unless you were with them from Day 1. It wasn’t due to lack of trying on our (the FBI’s) part.”

Historically, the Detroit mafia has almost entirely been intertwined by blood relation, with members constantly marrying off daughters, sons, nieces and nephews to other members and their kin. In addition to encouraging intermarriage, dons Joe Zerilli and Black Bill Tocco believed in optimum insulation for the Family’s leaders and maximum delegation to subordinates, even allowing non-made members of the organization to run crews and rise to administrative posts.

Salem helped the Detroit mob manage its business interests in Las Vegas and the syndicate’s silent ownership and skim operation at the Aladdin Casino and Hotel. He was also a legendary pool player. The Capital Street Social Club was alternatively referred to as “The Rack” or “The Cushion and Cue.” Salem died of natural causes in 2009.

Hilf, the premier sports handicapper and bookie in the Midwest from the mid-1980s until he died of kidney failure in the winter of 2014, was considered the Detroit mob’s de-facto acting consigliere at the time of his death, filling the role of top advisor to then-alleged street boss, now-reputed-don Jack (Jackie the Kid) Giacalone, Billy Jack’s son and Tony Jack’s nephew. Jackie Giacalone (66), his dad, Hilf and Salem all went down together in a 1991 federal gambling and racketeering case.

Giacalone’s predecessor in the boss’ chair was Black Bill Tocco’s oldest son, Giacomo (Black Jack) Tocco, the Godfather of the mafia in Michigan for 35 years. Jack Tocco, who died of a heart ailment in 2014, thwarted an FBI undercover sting in the early 1980s with his libido. According to sources familiar with the sting, which involved a female undercover agent posing as an instructor at the Tocco-owned Warren Tennis Club, the operation was shuttered when the mob don tried to start romancing his purported employee.

“Jack wanted to fuck her, that stopped the whole enterprise in its’ tracks” said one retired FBI agent.

Around that same time, the FBI in Nevada inserted an undercover agent into the Detroit mafia’s Las Vegas wing. The mole was quickly discovered by those mining the shop for the Motor City mob troop in the desert. Michigan FBI agent Sam Ruffino listened in on a conversation in 1982 between the crime family’s then-Nevada front man, Bill Pompilli and Tocco, Billy Giacalone and another powerful Detroit mobster, Anthony (Tony the Bull) Corrado, at a hotel near the Detroit airport where it was mentioned that they was aware of who the undercover agent was. The said FBI agent, George Togliatti, now an adjunct professor at UNLV, was immediately extracted and the operation was discontinued.

Pompilli, a former Toledo bookmaker and mid-level overseer for the Motown Mafiosi at the Aladdin in the 1970s, had graduated to man in charge on the ground at the Edgewater Casino and Hotel in Laughlin, Nevada, in the 1980s – after getting busted for their malfeasance regarding the Aladdin, the Detroit mafia’s brass turned their attentions to the Edgewater. During his 1982 rendezvous and conversation with Tocco, Giacalone and Corrado overheard by Ruffino, Pompilli told his mob benefactors that they were stealing $200,000 a year from the Edgewater in skim money.

Tocco, Giacalone and Corrado were all indicted in the landmark 1996 Operation Gametax case and each served prison time following convictions. Tocco and Corrado were found guilty at trial, Giacalone pled guilty, admitting his membership in and the existence of the mafia.

Current reputed Detroit mob consigliere Anthony (Tony Pal) Palazzolo was ensnared in an undercover federal sting in 1993. The 73-year old Palazzolo was caught offering to help a Canadian undercover cop launder drug-trafficking proceeds. Per FBI memos and sources on the street, Tony Pal has been the crime family’s lieutenant responsible for syndicate activity in Canada since the 1980s.

The wire-wearing Canadian ‘G-Man’ – working in coordination with the FBI in Detroit –, recorded Palazzolo bragging “This is my city,” as he gazed the city’s skyline from a posh downtown hotel penthouse suite and claiming that Jimmy Hoffa’s body was put through a meat grinder as he gave the undercover cop a tour of his Detroit Sausage Company headquarters in historic Eastern Market. Palazzolo’s name surfaced again in the iconic Hoffa slaying a few years ago, when former Detroit mob underboss Anthony (Tony Z) Zerilli, Joe Zerilli’s son and Jack Tocco’s first cousin, underwent a late-2012 debriefing by FBI officials and fingered Palazzolo as the man who killed Hoffa, bludgeoning him to death with a shovel and burying him on Tocco’s farm property in Oakland Township, Michigan, a good half-hour drive from Detroit proper. A high-profile dig of the farm in 2013 property proved fruitless.

Like his cousin Black Jack, Tony Zerilli was convicted in Operation Gametax. Zerilli was found guilty at a summer 2002 trial and imprisoned for five years. The RICO indictment spawned a bitter feud between the two cousins and former mob princes, elevating already existing tensions to a crescendo and leading to Zerilli going to the FBI and pointing the finger at Tocco for ordering the Jimmy Hoffa hit to be carried out on his property and his body laid to rest there as well almost four decades earlier.

Palazzolo was only a soldier back then and a driver and bodyguard for Detroit mafia capo Peter (Bozzi) Vitale, another person implicated by Zerilli in being part of the Hoffa assassination conspiracy. Per one federal document, Tony Pal acted in a liaison capacity to the Marcello crime family in New Orleans in the 1980s and early 1990s. Some people call Palazzolo “The Butterfly” for his ability to be elusive in his underworld dealings.