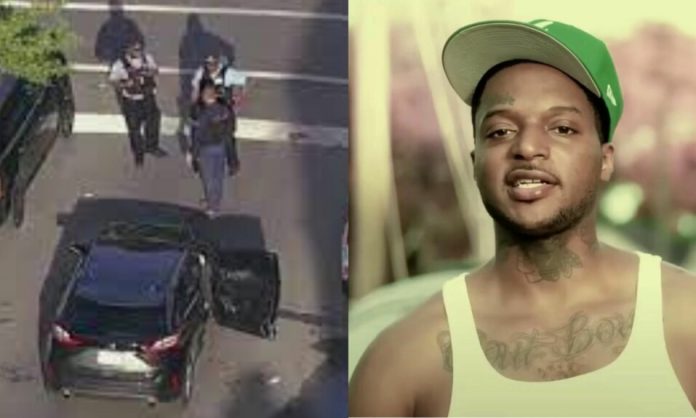 The year 2022 has already seen four murders of popular rappers. Chicago rapper FBG Cash and Atlanta rapper Trouble were both gunned down this month in their respective hometowns. Below is a rundown of all the rappers in the music industry to be slain in the last 35 years.

*Co-founder of the influential east coast rap contingent Boogie Down Productions is shot to death behind the wheel of his jeep in the Bronx projects.

*Founding member of the Motown Records rap group Wreckx-n-Effect from Harlem is killed in argument over a girl at picnic in the wake of the group’s first album hitting shelves months earlier.

*The Puerto Rican rapper is killed in carjacking in Dallas.

*The Cash Money Records artist is killed in a New Orleans housing project in an alleged domestic dispute.

*Live Squad member and Tupac Shakur and Notorious B.I.G. affiliate is killed in Queens on the one-year anniversary of the famous Quad Studio shooting-and-robbery attack survived by him and Shakur, which served as the seminal event in the notorious East Coast-West Coast Rap War.

*Co-founder of the RBL Posse.

*The Rap-A-Lot label artist is killed in East Oakland.

*Killed in a Las Vegas drive-by following attending a Mike Tyson boxing match (succumbs to wounds a week after the attack).

*The lone witness to the Shakur slaying is killed inside a New Jersey housing project.

*Murdered in a drive by on a promotional tour of Los Angeles after leaving an industry party on Fairfax Avenue.

*Gunned down in the parking lot of a Houston nightclub and recording studio by an assailant toting a AK-47.

*On the verge of a Roc-A-Fella contract, killed in a Harlem drive-by.

*Founding member of the Lost Boyz rap group, killed outside a Sheraton Hotel in Queens.

*Founding member of D-12 and Eminem affiliate is killed in a fight at BBQ in the weeks after Eminem rocketed to international superstardom.

*Founding member of the NAAM Brigade rap group, killed in a Philadelphia.

*Murdered in a Compton, California drive-by.

*Killed in a recording studio in Queens.

*Killed in his hometown of Savannah leaving PurePain Recording Studios.

*Killed in a Brooklyn housing project.

*Killed inside his mother’s house.

*Killed in a shooting at an after-hours club on Motown’s far north eastside.

*Killed outside a Brooklyn seafood restaurant after an argument with fellow patrons in a parking lot turns violent.

*Killed in Seattle after a recent move to the Pacific Northwest.

*Killed in Los Angeles over beef starting in his hometown of Atlanta.

*Killed in New Orleans behind the wheel of her Mercedes Benz.

*Killed in a drive by in Inglewood, California.

*Founding member of the R.A.M. Squad rap group, killed in front of club in Philadelphia after having testified against a set of Philly drug dealers months earlier.

*The Trill Entertainment label dynasty scion is killed in the parking lot of Georgia hospital while awaiting the birth of a child.

*Killed in fight over video game.

*Killed on the porch of his mother’s house.

*Killed outside a Houston strip club.

*Killed in his hometown of Montgomery, Alabama.

*Chief Keef affiliate and Glow Gang member is killed in a drive-by shooting in Chicago.

*The 2Chainz and Gucci Mane affiliate is shot inside a Atlanta recording studio allegedly by fellow rapper “No Plug.”

*His manager was killed days later.

*He was the third member of the Shy Glizzy crew to be murdered in less than 18 months.

*The Quality Control Music label rapper was shot to death in the parking lot of a New Orleans Waffle House.

*The former Jive Records artist is shot in front of his Missouri residence.

*The 21 Savage-affiliated rapper was gunned down in broad daylight waiting in line outside a designer mens clothier in the Windy City’s Magnificent Mile tourist district.

*Gunned down inside a South Memphis bakery.

*The up-and-coming Inglewood MC is slain in his driveway.

*Stabbed backstage at the Once Upon A Time In L.A. Music Festival being headlined by Snoop Dogg, Ice Cube, 50 Cent and YG.

*The Yo Gotti-signed wordsmith is shot to death in Houston.

*Shot to death inside his home (his brother was arrested for the crime). Eversole was one of the early pioneers of Crunk rap music and MCA Records released his trademark sports-anthem staple “We Ready” in 2002.

*The influential Hotlanta rhyme spitter is killed in a home invasion of a girlfriend’s apartment.

*Shot to death behind the wheel of his car on the Windy City’s Southside. 21 Savage protege.