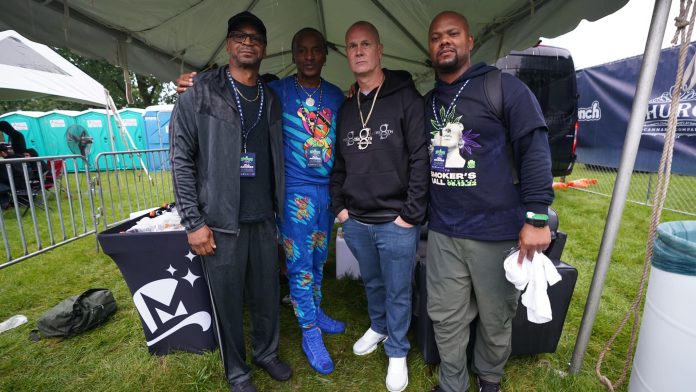 Photos of Curry and Wershe surfaced on social media Saturday and Sunday, showing the pair of Motown icons posing together at the event. Wershe has his own legal marijuana brand called The Eighth. The compelling, yet incredibly complex relationship-backstory between the pair was depicted in the 2018 film White Boy Rick, starring newcomer Richie Merritt as Wershe and Jonathan Majors as Curry. Oscar winner Matthew McConaughey played Wershe’s dad in the big-budget flick.

“Lil’ Man” Curry ran the Eastside Detroit drug game in the 1980s. As a teenager, Wershe was his right-hand man, having been secretly recruited by a federal drug task force to infiltrate the Curry Boys Gang when he was leaving the eighth grade in June 1984. In his two years on the government payroll, the slick and street-savvy Wershe became a celebrity in Detroit party and media circles, eventually stealing Curry’s wife — then-Detroit Mayor Coleman Young’s beautiful niece Cathy — amid a falling out with his mentor in the cocaine trade as the feds closed in on Curry’s organization

Wershe cut ties with the federal drug task force in late 1986 and dove headfirst into the Detroit dope world on his own, sans Curry and the backing from Uncle Sam. He was arrested in May 1987 in front of his grandmother’s house and charged with possession of 8 kilos of cocaine police found in a neighbor’s backyard. Even though he was only 17 years old, Wershe was convicted as an adult at a three-ring circus-like jury trial in state court and slammed with a life sentence. His subsequent cooperation broke up a dirty police ring linked directly into the Mayor’s office and helped bring down the murderoius Best Friends gang.

Media attention and public outcry spawned from the Hollywood film and the Netflix documentary White Boy earned Wershe parole from Michigan. When he was finally released from a Florida state prison in July 2020 after serving three years for participation in an auto-theft conspiracy, Wershe, 52, left the prison gates as the longest serving non-violent offender in the history of the U.S. criminal justice system. Essentially, he wound up serving more than 32 years behind bars for a traffic stop.

Curry was indicted by the feds in April 1987 in a sprawling drug and racketeering case and copped a plea. The 64-year old one-time drug kingpin did 12 years in prison and walked free in 1999. Beginning in the 2010s, Curry began campaigning for Wershe’s release. The two had spoken on the phone before this weekend, however had not seen in each other in person since the winter of 1987.

Wershe originally met Lil’ Man Curry through Lil’ Man’s baby brother, Rudell (Boo) Curry, who was present at his older brother’s Smoke Festival this weekend and appeared in some of the photos with Lil’ Man and Wershe that made their way onto social media. Boo Curry did five years in prison in the Curry Boys drug case and got out in 1992.