The Gangster Report DISCOVER THE ART OF PUBLISHING
Home Regions East Coast Watching His Uncle’s Back With Uncle Joe: Philly Mafia Up-&-Comer Convinced Ligambi To Give Joe G A Pass 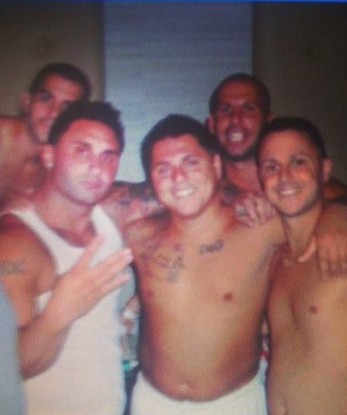 February 4, 2021 – Reputed Philadelphia mob captain Domenic (Baby Dom) Grande got his uncle back in the good graces of the Bruno-Scarfo crime family following a lengthy prison sentence and talk of revolt, per federal records. As a result, today, Joe Grande is back on his feet in North Jersey, sources claim, and reporting to his baby nephew, “Baby Dom,” in the family’s power structure.

The 41-year old Grande, a rising star the likes of the South Philly centered family hasn’t seen since the emergence of mafia don Joseph (Skinny Joey) Merlino in the 1990s, was indicted late last year on racketeering and drug charges. He’s pleaded not guilty and is awaiting trial on home confinement.

Joe Grande was on the outs with Merlino and his acting boss Joseph (Uncle Joe) Ligambi in the late 2000s until Joe G’s nephew, Baby Dom, stepped to the plate and squashed the beef, per internal federal law enforcement briefings. The Grandes have a rich history in the rackets.

Baby Dom Grande’s dad is Salvatore (John Wayne) Grande, the Philly mob hit man turned federal informant after a drug bust in prison. In the 1980s, “Waynie” Grande was one of then boss Nicodemo (Little Nicky) Scarfo’s top enforcers. His uncle Joe and his grandfather, John (Coo Coo) Grande, also worked for the maniacal and malicious Little Nicky, who’s bloodlust led to a near complete decimation of an organization build on a foundation of diplomacy.

Scarfo was sentenced to life in prison in 1989. That sentenced was eventually overturned, but he still had a 55-year bid included that meant he would never see the light of day again as a free man. That didn’t mean that he didn’t still live and breathe “La Cosa Nostra.”

But Scarfo’s former errand boy Skinny Joey Merlino, who had won a shooting war for power in the family in the years after Little Nicky was taken off the street, didn’t want anything to do with him – he allegedly tried to murder Scarfo’s son, “Nicky Jr.” over the belief that Scarfo had placed a murder contract on his head following a beef Little Nicky had with Skinny Joey’s dad, Chucky, Little Nicky’s one-time underboss. Little Nicky got Nicky Jr. transferred to the Lucchese crime family in New York and made a capo for a brief period of time in the 2000s.

A decade ago, Joe Grande, 60, was finishing up a 24-year prison stint for racketeering and backing an ultimately futile attempt by Little Nicky Scarfo to take back the crime family for himself from behind bars, per government informant files. The deranged Scarfo planned to run the family through his son, but never got the chance because Nicky Jr. got nailed for racketeering and ripping off a bank for millions of dollars and sent to prison.

Grande got into a physical altercation with fellow Philly mob soldier Joseph (Joey Punge) Pungitore in a prison yard over Grande’s allegiance to Scarfo in 2008, per FBI memos. Pungitore allegedly told Grande that he better get with the program and get into the modern age, that Merlino and Uncle Joe Ligambi had the keys to the kingdom, now, not Little Nicky.

On the heels of serving his own 12-year prison term for racketeering, Merlino, 58, relocated to South Florida in the 2010s. Ligambi, 81, had the final say-so in South Philly and North Jersey mob affairs for two decades, only deferring to Merlino for occasional special projects and policy decisions, per informants. He allegedly retired on his 80th birthday in 2019.

As Grande approached his outdate in March of 2011, his nephew Baby Dom and the Bruno-Scarfo crime family’s North Jersey capo Joseph (Joe Scoops) Licata convinced Grande to have a change of heart and “come in” under Merlino and Ligambi’s regime, per one of the FBI memos. Baby Dom Grande and Joe Licata greased the wheels with Ligambi on Joe Grande’s behalf, per sources, “getting in Uncle Joe’s ear” about giving Joe Grande a “pass” for his subversive behavior.

Ligambi agreed and when Joe Grande went to pay his respects to his new boss at a backyard barbeque in New Jersey in the spring of 2011, he asked Uncle Joe for permission to put his nephew up for a button, according to FBI informants. Uncle Joe, just weeks away from being jailed himself on a racketeering case he would beat at a pair of trials, told Grande that had already been nominated for made man status by other members of the crime family. The FBI believes Joe Grande troubleshoots for Philly mob administrators in North Jersey with members of the New York crime families operating in the territory, per sources.

The topic of Joe Grande and Scarfo era generation wiseguys coming out of prison after serving long sentences was discussed in a recorded conversation between Scoops Licata and New York mob soldier Nick (Nicky Skins) Stefanelli, who was wired for sound by the feds. Below is an excerpt from the chat held in a Belleville, New Jersey restaurant in October 2010.

Licata: Fuck him, this is bullshit.

Stefanelli: Let’s just hope this Joe Grande comes in line, he backed Nicky in that whole thing. He told Joe Punge, “You’re on the wrong side of this. Your guys (Merlino, Ligambi) aren’t recognized (by New York),” trying to stir up all the old shit.

Licata: If he sends word to me, I’m going to say, ‘Go see our friend (Ligambi) and check in.” If he’s worried about it, I’ll go with him. Joey Punge tried to fucking kill him in there. He pummeled him in the yard, fucking buried him.

Stefanelli: What about the kid?

Licata: Three days after Joe G’s out of the can, the nephew (Domenic Grande) comes by and wants to set a meeting. Guy literally just checked into the halfway house five hours earlier and the kid says he wants to see me.

Licata: Yeah, he was never a problem.

Licata: The kid Domenic, the nephew, he’s already in the guy’s ear (Ligambi’s), telling him his uncle wants to pay his respects, you know that Joe G wants to meet up. Couple days later, I took Dom aside at a wedding and I gave him a hug and a kiss and I said give a hug and a kiss to your uncle and tell him I love him. Tell him, don’t worry about it. Go see Joe (Ligambi). It’s all taken care of. It’s all smoothed over. Tell him, as long as I’m here, ain’t nothing going to happen to him.

This next excerpt is from a conversation between Nicky Skins and Joe Scoops two months later:

Stefanelli; Joe G is back around. He’s acting like he ain’t afraid of nothing no more.

Licata; He didn’t know Joe (Ligambi) was going to save him (give him a pass). It doesn’t hurt that everybody loves the kid, Dom. Joe says Joe G wants Dom to get down, wants to propose him. Joe told him, he’s got two people who already got his name on the pad.