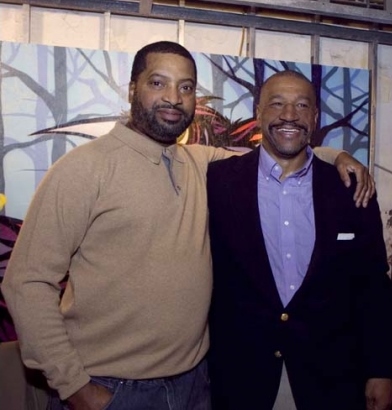 The month-long trial of Detroiters George (G.G.) Rider, Marcie Griffin and Eric Gibson for the 2017 murder of Julii Johnson ended late last week with guilty verdicts across the board in Macomb County Circuit Court. The verdicts bring the curtain down on an intricate and compelling saga of a lover scorned on a rampage of vengeance, two convicted Motor City drug dealers on opposite sides of a drama-intensive domestic quarrel, a DNA testing mishap and what appeared to be a string of conflicting agendas. All three will be sentenced to life in prison next month.

While the feds have been itching to stick G.G. Rider behind bars for the rest of his life for decades, it was state authorities – most likely with prodding from the FBI and U.S. Attorneys’ Office – that finally accomplished the feat. Nonetheless, the feds in Detroit are certainly slapping high fives this weekend in celebration.

The 60-year old Rider is a shadowy figure and local eastside street legend, who had successfully reinvented himself into a legitimate businessman and real estate entrepreneur until his arrest two and half years ago. Rider was found guilty of acting as the middleman for Griffin in hiring the 26-year old Gibson to kill Johnson, who was dating Griffin’s ex-boyfriend and father to her children, Jimmy Lattner, like Rider, a formidable presence on the streets of Detroit for a number of years.

Johnson, 34, was slain on the morning of January 13, 2017, gunned down as she exited Lattner’s residence in Warren, Michigan. She and Lattner were in a beef with Griffin. Lattner had left Griffin for Johnson in 2015. Prosecutors contended that Rider was courting Griffin and offered his help in exacting revenge as a means of currying favor with her. Griffin was caught on video threatening Lattner and Johnson at Lattner’s car wash nine days before Johnson was killed.

Gibson’s DNA was found on the murder weapon. The case against Griffin and Rider was circumstantial and didn’t include any physical evidence.

The investigation encountered twists and turns from the very start.

In the Michigan State Police crime lab’s initial testing of the murder weapon (9 millimeter Smith & Wesson), Lattner’s DNA was found alongside Gibson’s. The lab was also testing a gun discovered in a secret compartment of Lattner’s truck (9 millimeter Ruger) and Macomb County prosecutors and the lab techs responsible for the testing claimed the samples were accidentally switched. A retest resulted in just Gibson’s DNA being traced to the weapon and no traces of Lattner’s DNA there anymore.

At first, Lattner was considered the prime suspect in the investigation – he faces a stiff prison term for being a felon in possession of a gun unearthed along with a half-million bucks in cash in a police search of the property in the aftermath of Johnson’s slaying. An eyewitness’ description of what the shooter was wearing matched Lattner’s wardrobe when police arrived at the crime scene.

After a few weeks though, the probe pivoted to Griffin and Rider, connected by prosecutors through a series of texts between Griffin and a phone registered to a company Rider and Gibson had ties to and cell phone “pings” placing them in the same area in the days and hours surrounding Johnson’s homicide. The seizure of the phone via a traffic stop of Rider proved controversial, leading to the original judge in the case stepping aside related to a conflict of interest.

The jury deliberated for two days, returning its verdict Friday afternoon. Rider and his co-defendants declined to offer the jury the option of coming back with convictions for second degree murder instead of first degree.

Rider denies any relationship with Griffin and believes the government manufactured the charges against him in a vendetta to his past ability to dodge major convictions and high priority inquiries into his dealings by law enforcement. Attorneys for Rider and Griffin, pointed the finger at Lattner as the person responsible for Johnson’s death.

The case itself was a 30-month web of twists and turns, fraught with delays, recusals and legal red tape. The start date for the trial was pushed back four times, once having already chosen a jury. The original judge overseeing the case, Jennifer Faunce, was forced to rescue herself by order of the state appellate court late last year due to her sister having been the judge who signed the warrant at the district court level allowing police to seize the cell phones in Rider’s possession on a vehicle stop in February 2017, two weeks before he was indicted and taken into custody.

A cryptic text wishing Griffin a good morning on the day of Johnson’s murder was a key piece of evidence presented to the jury. Moments later that same morning, Griffin received a text reading, “I hope you understand,” and she responded “I understand everything about it.”

Rider served eight years in federal prison for narcotics trafficking. Upon his release from prison, he re-crafted his public image, establishing himself as a real estate investor and community activist at a time when the city of Detroit was on the verge of experiencing an economic revitalization.

In the months preceding Johnson’s murder, he sold the historic Fine Arts Theatre for 1.3 million dollars. Urban myth in Michigan has long considered the Fine Arts Theatre haunted for the oddly high number of untimely deaths linked to the property.

Lattner, 44, has two drug dealing convictions on his rap sheet from when he was the leader of the World Domination Gang in the late 1990s and early 2000s. He did six years in prison and got out in 2010. Lattner invoked his Fifth Amendments rights against self incrimination and refused to testify at Griffin and Rider’s trial.