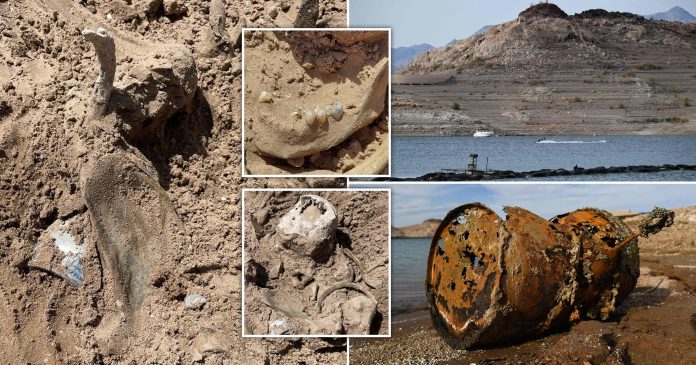 August 7, 2022 — Yet another set of human remains popped up near Lake Mead in Las Vegas this weekend, making it four bodies to emerge from the body of water in the past three months. Lake Mead is the largest reservoir in the United States and is experiencing a drastic drop in water level. Las Vegas was once a gangster’s paradise and is a city with a trove of unsolved mob-related disappearances and murders linked to the old Tony (The Ant) Spilotro regime documented in the film Casino.

The first set of human remains were discovered on May 1 encased in a barrel. The second set, less than two weeks later. Body No. 3 surfaced on July 26.

A man in Nevada believes one of the victims to be his dad. Todd Kolod told The Daily Mail last week he thinks, his father, Danny Kolod, who drowned in a speed-boating accident in 1958 was the second set of remains found on May 10.

Like with the last body unearthed, the remains discovered Saturday were entrenched in mud near Hemenway Harbor’s Swim Beach. The water level at Lake Mead is expected to drop another 20-30 feet in the next year.

Authorities in Nevada are examining the possibility that the bodies were victims of Spilotro, a ruthless mob overlord responsible for wreaking havoc on The Strip in the 1970s and 1980s before dying in a brutal mob slaying himself. Spilotro was sent to Vegas in 1971 by mafia dons in Chicago to look after the Midwest mob’s investments in the city’s booming hotel and gaming industry. He was beaten, stomped and strangled to death in Chicago in June 1986.

Federal law enforcement credits Spilotro and his so-called “Hole In The Wall Gang” with more than two dozen killings. The three names getting the most glances from investigators as potential victims tied to the recently-discovered remains are missing Chicago mob associates Jay Vandermark, John (Johnny Pappas) Panagiotakos and Billy (Bahama) Crespo.

Vandermark and Johnny Pappas both went missing in the same three-week period in August 1976. Crespo disappeared in the summer of 1983. Vandermark’s drug addled son, Jeff, was killed less than a year later. 1n 1995’s Casino, Oscar-winning actor Joe Pesci played a memorable character based on Tony the Ant. There was another character in the movie inspired by Vandermark called “John Nance.”

According to federal court records, Vandermark was placed in charge of the count rooms at four separate mob-owned casinos and tasked with overseeing the “skim.” He disappeared on August 1, 1976 while being sought for questioning by the FBI and the mob worrying he would cut a deal to save himself and his son.

The feds had raided the casinos he was running count rooms in three months earlier. Hours after the raid, Vandermark bolted town for Arizona, per Clark County Sheriffs Department records.

The last public sighting of Vandermark was in Phoenix with members of Spilotro’s Arizona crew. Per multiple FBI informants, Vandermark’s killing was to prevent him from giving up the mob’s casino-skimming racket to save himself and his drug-addled son. Vandermark’s name is changed to John Nance in the Casino script.

Johnny Pappas managed a Teamster-funded, mafia-owned resort on Lake Mead. He vanished on the night of August 18, 1976 on his way to a meeting at Jo Jo’s Restaurant to discuss selling his boat. Pappas’ abandoned car was found in the parking structure attached to Circus Circus casino on August 21. Las Vegas Police Department records linked the Windy City transplant to infamous Outfit fixer Gus (Slim) Alex.

From almost the day he landed in Las Vegas in the 1960s, Pappas was deeply involved in Nevada Democratic Party politics. In the 1970s, Pappas was employed at several mob-controlled casino-hotels. By 1974, he was given the plum job of running the Echo Bay Resort.

Crespo got busted with a shipment of cocaine on a flight going from Miami to Las Vegas. He was acting as a courier for mob skim money being invested into drug deals in South Florida. At the time of his disappearance, Crespo was scheduled to testify against Chicago mafia associates in a casino-rip off case.

Billy Crespo was busted in November 1982 at McCarran Airport in Las Vegas deplaning with $400,000 in cocaine stashed in a suitcase. His federal grand jury testimony led to the indictment of ten conspirators in a drug and money-laundering scheme, including Chicago mob associate Victor Greger. When Crespo went missing in June 1983, the prosecutor’s case fell apart and the charges against Greger and six co-defendants were dropped. Greger was found guilty of money laundering and extortion in another case tied to his work at a mobbed-up gambling palace on The Strip.