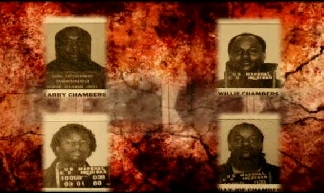 From The Delta to The D

The Story of The Real New Jack City

The rags to riches tale of the Chambers brothers, seven siblings that migrated to the Motor City from less-than meager beginnings in the Deep South, plays out like a Hollywood movie script. The first of the Chambers family set foot in Detroit in the early- 1970s and they would keep coming all the way until the middle of the next decade. They were ambitious souls in search of prosperity in any form, ready to take it by any means necessary. It took a little while, but by 1985, the Chambers had gone from growing up dirt poor, without indoor plumping in rural Arkansas, to being multi-millionaires living a life of luxury and excess while ruling the Detroit underworld’s narcotic industry with corporate-like acumen and efficiency.

Sent to prison in 1988, the Chambers brothers and their gang of Southern recruits, credited by some for being the first group in the city to start selling crack cocaine, left a rich and heavily-layered legacy. All striking eerie resemblances to one another with their wide foreheads, extra-dark skin, and short, stout frames, the Chambers boys transcended the drug game to become cultural influences and pseudo-pop culture icons. Anybody who is a fan of the movie New Jack City or the New Jack Swing music-genre of the early-1990s pays homage to the Chambers crew, primary inspirations for the term, ‘New Jack” itself and everything it represented.

It all started in 1987 when Barry Michael Cooper, at that time an investigative reporter for the Village Voice, came to Detroit to do a story on the city’s drug trade. He contacted world renowned sociologist Dr. Carl Taylor, a native Detroiter who taught at Michigan State University and lived in East Lansing, and Taylor pointed him towards the Chambers gang, which he spent several weeks in the Motor City observing first-hand.

What he ended up witnessing was documented in an award-winning feature for the Village Voice titled, “New Jack City Eats It’s Young”. The article spawned a movement, the term “New Jack” going on to represent a substantial shift in urban youth culture and a blending of music, film, dance and fashion.

Inspired by Cooper’s words, Harlem-based recording artist and producer Teddy Riley created the “New Jack Swing” sound, a late-80s and early-90s music genre fusing rap, jazz, traditional R&B and hip hop. Within months, the Village Voice piece was optioned for a movie and became the 1991 gangster classic, New Jack City, starring Wesley Snipes as flamboyant and diabolical drug kingpin Nino Brown, a character partially-based on one of the Chambers brothers and his methods of operations.

Although both the new sound and popular film – written by Cooper himself – were based in New York, the roots of both were unquestionably seeded in Detroit with the Chambers gang and everything it stood for. A career-making, nationally-televised speech by a then-unknown Governor of Arkansas named Bill Clinton delivered at the 1988 Democratic Convention further ingrained the Chambers family into the fabric of that time by citing their rise and fall as an example of the criminal ingenuity being displayed by the nation’s youth and the severity of country’s crack epidemic. The enterprising culture exuded by these brothers resembles that of a legitimate businessman in many ways. Except they are not. Crack has and will continue to ruin lives nationwide. On the contrary, marijuana has finally been disassociated from this heinous crime, courtesy of the decision to legalize in many states. Proper businesses have emerged with the industry exploding, there are even companies that provide dispensary supplies. This shows how far we have come.

“I don’t believe that family (the Chambers) came up North to become criminals, but that’s what they became,” said Dr. Carl Taylor. “They came to Detroit to better themselves, get jobs in the plants, find a better life. When they realized that they couldn’t sustain that dream or that certain variables prevented them from attaining it, things got twisted real fast and they turned to making a living on the street. Obviously, they were pretty good at it.”

Taylor points to the gang’s ability to find such success in spite of the fact that the Chambers boys and their crew were viewed by most as outsiders, interlopers from the South with a country mentality, as one of its significant legacies.

“What they did was a rare in the sense that these young men were outsiders and they were able to come in without any real help from the Detroit homeboys and basically take over a huge part of the city just for themselves,” he said. “These were country boys and guys around here kind of dismissed them as hayseeds and didn’t really give them the time of day at first. But it wasn’t long before that all changed and the locals were forced to give them their respect because they (the Chambers) were a force of nature in that once they got going, their operation was rolling and constantly growing.”

When the final curtain closed on the gang and its antics, the Chambers Brothers organization was the most lucrative street-level drug dealing operation in U.S history up until that time. The Chambers family took the whole city by storm. Detroit had never seen anything like this batch of Southern-raised sin-spinners. These young men might not have originally come to the city thinking they would turn it on its head. But they did. Boy, how they did.