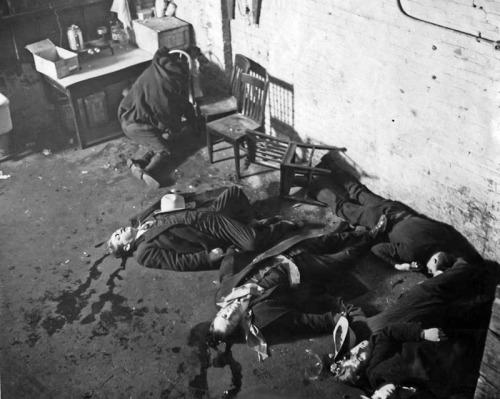 Legendary Chicago mafia boss Al (Scarface) Capone reached out to his underworld allies in Detroit, the infamous Purple Gang, for help in pulling off the notoriously-brutal St. Valentine’s Day Massacre in the winter of 1929, per police informant intelligence records and numerous federal documents. These filings reveal that Capone had the Purples set up a group of rivals of his from the Northside Irish mob to be slain that fateful cold, snowy morning in the Windy City almost 87 years ago, as well as provide a lookout squad for the hit and at least one of the shooters dispatched from Capone’s Southside mob stomping grounds to gun down the over half-dozen Northsiders in cold blood.

The Italian Capone and the Jewish Purple Gang, led by the four Burnstein brothers (Abe, Joe, Ray, & Izzy), worked harmoniously while dually overseeing all bootlegging activity in the Great Lakes region of the United States throughout the second half of Prohibition, each becoming an American icon of the era. “Dapper” Joe Burnstein, the second oldest Burnstein brother, married a showgirl from Illinois who worked at a Capone-mob nightclub. For a majority of Capone’s reign atop the rackets in Chicago, he sold the Purples’ “Old Log Cabin” brand of bootlegged booze. In reality, Capone had no choice but to work with instead of against the Purple Gang, for the Purples’ territory sat directly on the Canadian and Capone’s didn’t.

According to one FBI file from 1945, Capone and the Purple Gang, with eldest Burnstein brother and syndicate chief Abe, acting as the Purples’ spokesperson, first met face-to-face at a dinner arranged to discuss territory distribution that occurred at the Book Cadillac Hotel in Detroit, the Purples’ headquarters, in February 1927 – also said to be on the agenda was the Purples beef with east coast Irish bootlegger Joe Kennedy, father of future U.S. President John F. Kennedy, over Kennedy encroaching on Burnstein brothers’ turf in Canada, which per FBI informants, Capone stepped in and settled, stopping an Abe Burnstein-issued contract on Kennedy’s life.

No more than a month later, the Purple Gang foreshadowed things to come in Chicago by orchestrating the Milflores Apartment Massacre, the killing of three local hoodlums responsible for a string of kidnappings in Detroit targeting Purple-affiliated mobsters on March 28 1927. The trio of Milaflores Massacre murders, carried out by Purple Gang assassins Eddie Fletcher, Abe Axler, Joe (Honey Boy) Miller and Fred (The Killer) Burke, were the first documented machine-gun slayings in the history of the state of Michigan.

Fletcher and Axler were native New Yorkers and the Purple Gang’s ace strong-arm tandem and hit team known in the underworld as “The Siamese Twins.” Joe Miller (real name Sal Mirigolotta) was the lone high-ranking Purple that wasn’t Jewish – actor Robert Blake played Honey Boy Miller in the 1960 movie, the Purple Gang. Burke, whose nickname told you his trade without having to ask, was a transplant from St. Louis and the Egan’ Rats Gang and became a frequently-utilized Purple gun-for-hire. He was the man alleged to be wielding the machine gun itself in the Milfalores Massacre.

Both Capone and the Purples rose to power at the exact same time: specifically in 1925, when Capone took over from his mentor, John (Johnny the Fox) Torrio, who retired to New York and the Burnsteins and several of their boyhood associates branched off from their gangland mentors, Charles Leiter and Henry Schorr of the Oakland Sugar House Gang, to open shop on their own operation, which quickly began being referred to in the Detroit press as the Purple Gang, for a robbery victim of theirs calling them “Purple… rotten, like tainted meat,” to a newspaper reporter early on in their careers in the street.

Throughout much of Capone’s reign atop the rackets in Chicago, he was at war with the Irish mob, stationed on the Northside. In 1929, the Northside Irish mob was led by George (Bugs) Moran. Flouting Capone’s authority, Moran ordered his men to begin hijacking the Old Log Cabin booze Capone’s Southside gang were buying from the Purples in Detroit and smuggling into to Illinois. Then, Moran tried killing Capone’s No. 1 enforcer, Vincent (Machine Gun Jack) McGurn, dispatching his top two lieutenants and hitmen the Gussenberg brothers, who caught McGurn in a phone booth and shot him, but failed to finish him off.

Capone swore vengeance. He looked for his pals in the Purples to give him a hand. Per Detroit Police Department intelligence files, the Purples were eager to chip in with the effort. And more than able. Not only did Abe Burnstein himself place a phone call to Bugs Moran in Chicago, offering to sell him a load of Old Log Cabin at a cut rate to act as the set-up for the attack, he sent five of his top men to help plan and carry out the job with Scarface Capone and Machine Gun Jack McGurn.

The Siamese Twins, Eddie Fletcher and Axler, the Keywell brothers (Harry and Phil) and “Killer” Burke were all dispatched by Burnstein to the Windy City in the first week of February 1929. Fletcher, Axler and the Keywell checked into a boarding house on the Northside across from SMC Cartage, a Moran hangout on Clark Street near the Webster intersection, Burke joined McGurn at a Southside safe house. Abe Burnstein told Moran he would have the batch of Old Log Cabin delivered to him at SMC Cartage early on Valentine’s Day.

On the morning of February 14, with the Keywells, Fletcher and Axler, acting as lookouts and signal men in the boarding house, a number of Capone gunmen, two dressed as cops, one of them Burke, stormed SMC Cartage on the go-ahead from the Purples across the street, who thought they recognized Bugs Moran – in reality, it was Moran muscle, Albert (Gorilla Al) Weinshank. Nonetheless, Burke and the Southsiders lined up seven of Moran’s men against the wall, including both Gussenberg brothers and Moran’s second-in-charge, Albert (Jimmy Clark) Kachellek, and machine-gunned them to death.

Nobody was ever charged in the St. Valentine’s Day Massacre. Chicago Police Department detectives traveled to Detroit to interview Fletcher and the Keywells, each identified by boarding-house staff as the occupants of the room directly facing SMC Cartage on the day of and the week leading up to the massacre. The FBI eventually discovered one of the machine guns used in the mass slaying in the possession of Fred Burke at his rural Michigan hideout. Burke died in prison on unrelated charges. So did Moran.

Harry and Phil Keywell would both be convicted of separate, unrelated murders in the years to come and served multiple decades in prison apiece as punishment. Capone was eventually nailed on tax evasion and did eight years behind bars – succumbing to syphilis in 1947. McGurn was killed on Valentine’s Day 1936 inside a Chicago bowling alley, a Valentine’s Day greeting card left next to his body. Fletcher and Axler were killed in a high-profile Detroit double homicide in November of 1933.

Abe Burnstein went into semi-retirement following Prohibition, voluntarily bequeathing his rackets and territory to the Michigan’s Italian mafia. He died of a heart attack in 1968, still residing in his penthouse suite at the Book Cadillac Hotel. Joe Burnstein, the Purples’ main go-between with Capone and the Chicago gangland scene, left the Midwest in the 1940s, settling in Los Angeles, where he would die peacefully in 1984.

*The consummate Purple Gang expert Paul Kavieff was consulted for this piece.