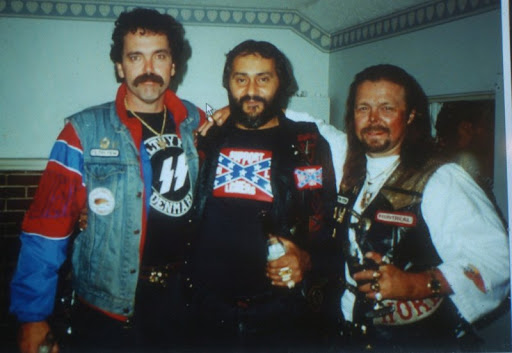 March 26, 2021 — The Wolf has remained in the shadows for the last two decades. Fabled Hells Angels Motorcycle Club enforcer David (The Wolf) Carroll is one of the world’s most wanted fugitives. He went off the radar 20 years ago this week, on March 28, 2001. Nobody has seen him since.

The 69-year old Carroll is believed to be globetrotting, staying in Hells Angels safehouses on multiple continents to avoid arrest for drug trafficking, racketeering and murder charges out of Quebec. Carroll was close to legendary Montreal Hells Angels boss Maurice (Mom) Boucher and is considered a suspect in 15 gangland slayings, per RCMP records. He joined Boucher in the HA’s Quebec Nomads chapter that exercised unilateral authority in biker affairs throughout Canada in the 1990s and early 2000s and acted as Boucher’s go-to muscle for “wet work,” informants tell investigators.

According to his RCMP jacket, Carroll was born and raised in Halifax, Nova Scotia and got his start as a “one percenter” in a club called The 13th Tribe. In 1983, The HA’s “patched over” The 13th Tribe, rechristened it the HA’s Halifax chapter and named Carroll the chapter boss. Per RCMP files, Boucher brought him to the Montreal area in 1985 and made him boss of The Laurentians, a mountainous tourist region north of the city, where the HA’s maintained substantial amounts of drug-dealing territory.

Authorities still believe The Wolf was one of the “hitters” in the notorious Lennoxville Massacre despite him being acquitted by a jury of playing any role in the March 24, 1985 mass murder of five Hells Angels at the club’s Sherbrook chapter in Lennoxville, Quebec. The “Lennoxville Five” — victims Laurent (The Englishman) Viau, Jean-Guy (Brutus) Geoffrion, Jean-Pierre (The Crosser) Mathieu, Michel (Mad Willie) Mayrand and Guy-Louis (Pork Chop) Adams — were core members of the HA’s North Chapter in Laval and targeted for death for their insolent behavior. Informants told the RCMP that Carroll was given The Laurentians turf as a reward for organizing the hit team to carry out the Lennoxville Mass

The Wolf did a year in jail for running a prostitution ring in the 1980s and he didn’t intend on going back.

The second Carroll got word that a major indictment was coming down against the Montreal Hells Angels, he split town. When a heavily-armed RCMP SWAT team brigade spread out across Quebec on the morning of March 28, 2001 to arrest the dozens of HA defendants in the case (codenamed: Operation Printemps or “Spring 2001”), including Mom Boucher, they picked up everyone but The Wolf.

Carroll vanished without a trace. They’re still looking for him today.

Prison psychiatric-evaluations peg the bilingual Carroll with a genius IQ. He has been spotted in New York, Paris, Berlin, South Africa, South America, Central America, New Zealand, Australia, Turkey and Mexico. The last-known sighting of The Wolf was in Australia in 2012. Interpol is of the opinion that he is supporting his travels by setting up wholesale drug deals in several of the countries he frequently visits.