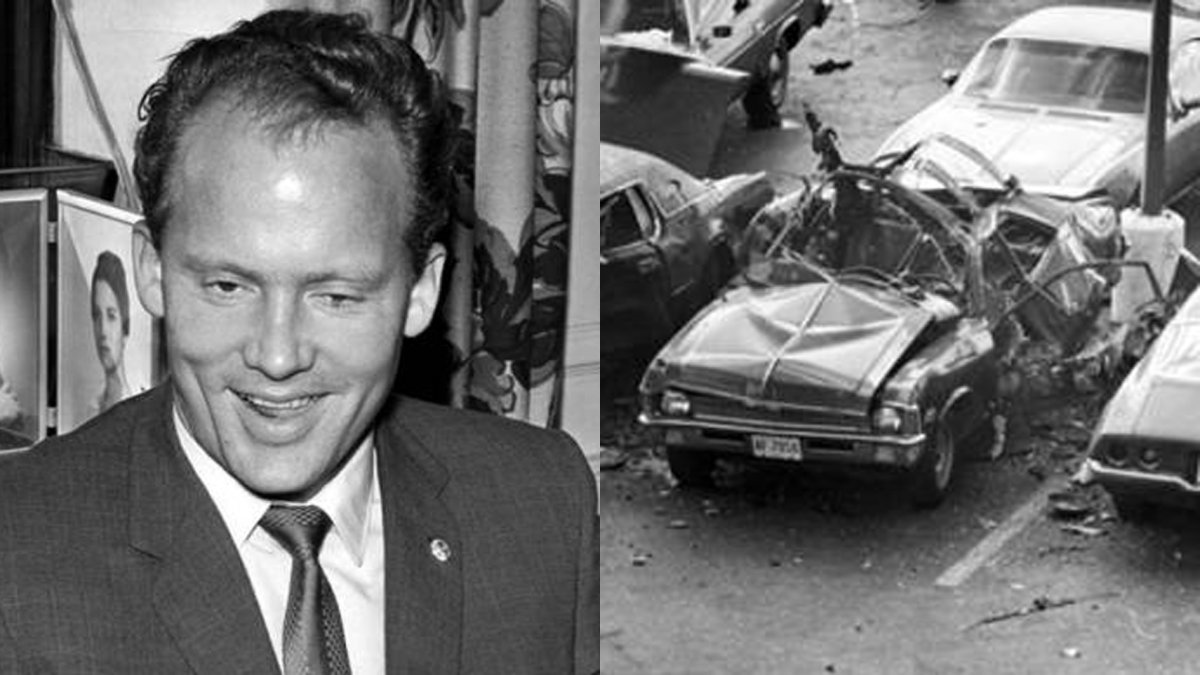 In the 1970s, Danny Greene and his Irish mob, known amongst themselves as the “Celtic Club,” locked horns with the Cleveland mafia for control of the city’s underworld. Throughout most of the decade, bombings, beatings and murders ravished the streets and drew headlines around the country. Greene was killed in a car bombing 40 years ago this week on October 6, 1977.

October 31, 1971 – Art Snepeger, Danny Greene’s gopher and overall right-hand man, is blown up by a car bomb he was attempting to place on a rival’s vehicle

November 26, 1971 –Greene’s friend-turned-rival in the trash hauling industry, Michael (Big Mike) Fratto is killed in a shootout with Greene at Cleveland’s White City Beach Park. Greene is let off on self-defense grounds.

March 29, 1975 – Notorious Cleveland Jewish mobster and numbers lottery boss Alex (Shondor) Birns is blown up in a car bomb after a falling out with Greene, who was a former protégé of his.

May 12, 1975 — Greene’s Eastside Cleveland apartment is blown up with Greene sleeping in it but he survives

September 19, 1975 — Cleveland mob figure John Conte disappears on his way to a meeting with Greene to discuss business in the local vending machine racket. He is later discovered beaten to death in suburban Austintown. Conte was a close friend and lieutenant of Cleveland mafia capo Joe Gallo.

May 26, 1976 – Longtime Cleveland mafia Godfather John Scalish dies on the operating table in a risky medical procedure on his ailing heart. The heavily-respected 64-year old Scalish had led the Ohio crime family since the 1940s and reportedly tapped capo James (Jack White) Licavoli before he died. Scalish’s passing sends the city’s underworld into a freefall it would never recover from, starting with Greene and his buddy John Nardi, the nephew of Scalish’s consigliere, Anthony Milano, and a head honcho in the Teamsters union, making a play for the crown themselves.

July 21, 1976 – Infamous Cleveland mob enforcer Eugene (The Animal) Ciasullo is nearly murdered in a porch bomb planted under his house. Ciasullo survives the blast, but the explosion blew apart his stomach and he was in the hospital recovering for weeks before voluntarily bowing from the hostilities.

August 22, 1976 — Cleveland mob associate and labor union strong arm Joe Kovach is shot to death in front of his home.

August 23, 1976 – Cleveland mafia underboss Calogero (Leo Lips) Moceri disappears, his blood-soaked Mercedes being the only evidence of his slaying. Moceri was don Jack Licavoli’s cousin and best friend. Earlier that month, Moceri had gotten into a public verbal spat with John Nardi at the annual Feast of the Assumption in Cleveland’s Little Italy.

April 5, 1977 – Hells Angel biker Enis (Eagle) Crnic is killed while attempting to attach a car bomb to a vehicle belonging to eastside Italian mob associate John (Johnny Del) Delzoppo. Despite the Hells Angels working relationship with the mafia, Crnic was hired by Greene for the job, greatly angering Licavoli and his administration.

May 17, 1977 – Aspiring Buckeye State mafia overlord and labor union boss John Nardi is killed in a car bomb outside his labor union hall.

June, 23 1977 – Cleveland mob associate and explosive expert Henry (Boom Boom) Grecco, a member of the hit team that planned and carried out the Nardi bombing, vanishes, presumably as part of “clean-up” from the Nardi job.

October 6, 1977 – Cagey Cleveland Irish mob boss Danny (The Irishman) Greene is killed in a car bomb in the parking lot of a suburban Lyndhurst, Ohio dentist’s office. The tenacious Irishman was 43.

November 17, 1977 — Irish mob lieutenant Elmer Brittain is shot to death inside his office located on Cleveland’s Westside. Brittain was closely aligned with Greene and the Celtic Club.

Summer of 1978 – The year after Greene’s murder, his former Celtic Club was merged into Licavoli’s Italian mafia contingent with little acrimony. A peace conference in late June 1978 between both factions was brokered by rising Cleveland mafia lieutenant Tommy (The Chinaman) Sinito, once a fervent rival of Greene’s.

July 6, 1978 – Cleveland mobster Joey (Joe Bugs) Bonarrigo is murdered in a beef with the Hells Angels.

November 16, 1978 – Irish mob strong arm Keith (The Enforcer) Ritson, who acted as Danny Greene’s main muscle and top hit man, is shot to death by Hans (The Surgeon) Graewe, a German-born Cleveland mafia associate and deranged assassin, on orders of the Licavoli group after word of Ritson’s intent on settling old scores with the Italians began surfacing in the weeks following the gangland consolidation effort kicking off.