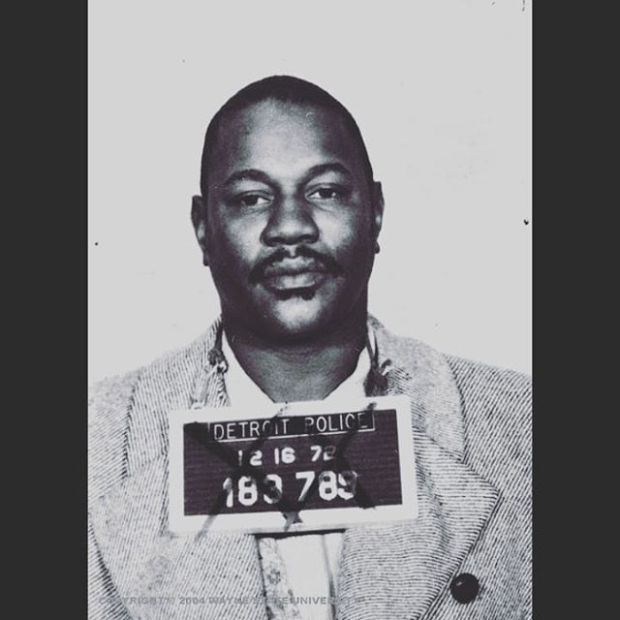 August 1, 2020 – Storied Detroit crime lord Francis (Big Frank Nitti) Usher died of a stroke this week at 78. Big Frank Nitti ran the city’s Black mob in the late 1970s and saw his infamy and both his reputation on the street and in the local media soar to meteoric heights. He was mentored and staked in underworld affairs by the notorious Giacalone brothers of Motown’s Italian mafia known as the Tocco-Zerilli crime family.

Usher was convicted and later acquitted of playing a role in one of the most high profile homicides in Detroit history, the July 1979 Michigan Federated Democratic Social Club Massacre where three victims were shot execution style and then beheaded as a result of a power struggle in Usher’s organization. In 2015, he was arrested for a hand-to-hand heroin sale but had the charges dropped before trial.

As a teenager growing up on the eastside, Usher ran errands for Detroit mafia street bosses Anthony (Tony Jack) Giacalone and Vito (Billy Jack) Giacalone, the men the FBI consider responsible for the famed disappearance and murder of Teamster boss Jimmy Hoffa. Tony Jack reportedly nicknamed Usher “Frank Nitti,” after Prohibition era Chicago mob boss Al Capone’s underboss and a character in the popular 1960s television show The Untouchables. Reference to the nickname was barred by the state court judge at his two murder trials.

Michigan State Police surveillance records note a young Usher hanging around the Giacalone crew at the LUESOD Social Club nearby where he lived as a boy and acting as a gofer for Tony and Billy Jack. A newspaper photo from 1958, shows a baby-faced Usher carrying the Giacalones’ briefcases into a court hearing.

When Usher started his own African-American crime family in the early 1970s modeled after the Italian mafia, the Giacalones financed and backed the venture, dubbed Murder Row. The syndicate headquartered at the Michigan Federated Democratic Social Club in Detroit’s Midtown area. The Giacalones used the Murder Row crew for muscle work well into the 1980s, according to DEA records.

Tensions in the group began rising after the 1978 imprisonment of Murder Row underboss Harold (The Hawk) Morton. Powell reached for more weight and a bigger piece of the pie. On the late afternoon of July 18, 1979, Powell allegedly called Usher and Usher’s lieutenants, William (Little Dirty) McJoy and William (Straw Hat P) Jackson, to a meeting at the Michigan Federated Democratic Social Club, and had McJoy and Jackson executed as Usher watched.

The wheels of the hit had went into motion days before, according to DPD files, when Usher’s No. 2 man James (Cool Cat) Elliott was arrested and jailed on a murder charge, leaving the Usher camp exposed with their top shot caller on the street being put on the shelf. Elliott’s spitfire girlfriend, Joanne Clark accompanied the Usher contingent to the meeting with Powell and was killed along with McJoy and Jackson. Clark cursed at her killers and told them to “get it over with already,” in the seconds before she was murdered.

The dismembered bodies of McJoy, Jackson and Clark were discovered that night stuffed into garbage bags in the back of an abandoned van near a freeway overpass off Harper Avenue. Months later, Usher, Powell and three other Murder Row members, were indicted for the triple homicide when DPD detectives flipped the girlfriend of Powell’s driver, Clarence (Fuzzy) Welton and the doorman at the social club, Forrest Alexander, the only eye-witness to the killings to talk.

Welton was slain that fall in retaliation for his girlfriend’s cooperation and his botching the disposal of the bodies. Tasked with burying the body parts, Welton forgot the shovels and lime in mid-transport and ditched his van in an alley by the I-94 expressway to head back to the social club to retrieve the burial tools. Before he could return, a concerned citizen noticed blood dripping from the van and called 911.

Powell and Freeman were acquitted in the case. Usher and Partee were found guilty and sentenced to life in prison. Big Frank Nitti had the conviction tossed on appeal and won his freedom at a 1994 retrial proving to jurors he was an intended victim in the hit not a participant. Informants told the FBI that Usher was spared in the slaughter because of Powell’s fear of blowback from the Giacalones. Powell was slain in an audacious 1983 gangland slaying at La Players Lounge on Detroit’s eastside, shot in the head as he was taking a shot of whisky at the bar and tipping the bartender with a $100 bill.

Usher attended Tony and Billy Giacalone’s funerals, in 2001 and 2012, respectively. He was a pallbearer at the 2014 funeral of Giacalone crew gambling chief Allen (The General) Hilf, who died of a kidney disorder and was a go-between for the Giacalone brothers and Murder Row.