The Gangster Report DISCOVER THE ART OF PUBLISHING
Home Bikers Rooster Katona Kicks It With Loved Ones For Holiday, Pagan’s MC Boss Gets Report Date For Jail Bumped To July To Avoid Violence 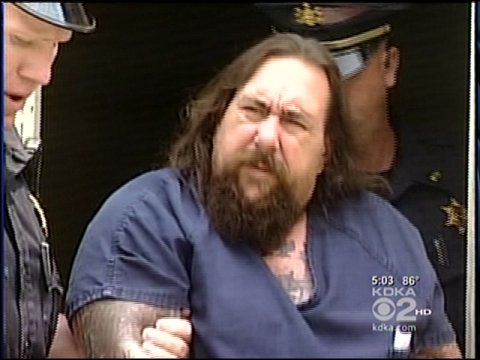 June 1, 2021 – Pennsylvania biker boss Dennis (Rooster) Katona got to spend Memorial Day Weekend with his family instead of a jail cell thanks to an extension granted on his report date for completing a sentence stemming from a narcotics bust ten years ago. The extension, which now places his report date on July 2, was approved because law enforcement in Westmoreland County want to keep Katona, the one-time Pagan’s Motorcycle Club’s national president, away from alleged murderer Victor Steban, who told the press on his way to his arraignment last week on double homicide charges that he was trying to “get” Rooster.

Steban is currently in the Westmoreland County Jail and Rooster Katona was scheduled to report back on Friday, May 28. Katona has six months more to serve before he’ll be eligible for parole from a 2014 drug conviction — he served two years of the sentence prior to the case getting reversed at the state appellate court level because of a faulty search warrant. The Pennsylvania State Supreme Court reinstated the charges two years ago and the U.S. Court of Appeals upheld the Pennsylvania high court decision earlier this year.

Steban, 53, fired off rounds of his guns at Katona’s home last month, authorities claim. He’s charged with murdering Penn Township couple, Jake Erdeljac and Mara Casale, on May 23, just hours after he shot up the Katona residence. Steban has pleaded not guilty in the case and the Katona family denies Rooster has any knowledge of who Steban is or what might be his motive to want to cause him harm.

The 55-year old Rooster Katona was the Pagan’s MC National President in the late 2000s and early 2010s. Rooster was found guilty of intent to distribute a controlled substance at a bench trial. During an August 2011 raid of his home, state police found three ounces of cocaine and three ounces of methamphetamine, totaling a street value of $25

Rooster Katona is the founder and owner of East Coast Cycles, a custom motorcycle shop with outlets in Pennsylvania, Florida, Germany and Austria. Back in the 2000s, Katona did four years in the fed joint for leading an attack on an Hells Angels MC banquet in Plainview, New York in 2002. The ensuing melee left Pagan’s MC member Robert (Mailman) Rutherford dead, dozens injured, ten hospitalized and over 70 arrested and convicted of rioting charges.

At the time of the 2002 brawl, Katona was the sergeant-at-arms for the Pagan’s Pittsburgh chapter and the club’s national treasurer. After his prison stint, in around 2008, he rose to become the club’s boss.

The Pagan’s are the No. 1 biker gang on the southeast coast and growing, maintaining a particular stronghold in the areas in and around Philadelphia and Pittsburgh, spanning across rural western Pennsylvania and into Maryland, Delaware and West Virginia. New Pagan’s national boss Keith (Conan the Barbarian) Richter and the club are in the middle of an expansion effort, pushing into untapped territory on the east coast and in the southwest.

Richter comes from the club’s Long Island, New York chapter and like Katona, served in a sergeant-at-arms capacity before ascending to the throne. Katona is said to advise Richter from afar, per sources tied to the Pittsburgh faction of the club. The 61-year old Richter faces a felon in possession of a firearm charge from an arrest he took at a traffic stop in New Jersey back in the winter leaving the annual Pagan’s party honoring “Mailman” Rutherford on his birthday.