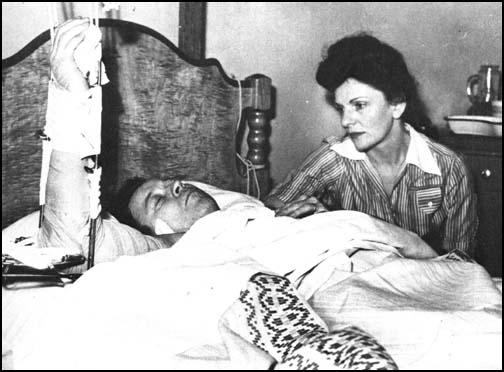 Deceased Detroit mob captain Santo (Cockeyed Sam) Perrone ordered labor leader Walter Reuther murdered, a contract unsuccessfully carried out by members of his crew, per FBI informants and a member of his own crew. Sometimes referred to as “Sammy the Shark,” the famously fierce and violence-prone Perrone and four of his associates, including his son-in-law and his bodyguard and protégé Peter (Tino) Lombardo were arrested for shooting and attempting to assassinate the prolific UAW President, but had the charges dropped before trial on the grounds of prosecutorial misconduct and the main witnessing fleeing custody.

Reuther eventually died in a plane crash in 1970 (he served 24 years in office at the top of the UAW). Perrone passed away from natural causes three years later in 1973, having been shelved in the decade preceding his death for his rogue behavior by Michigan mob administrators.

Born in West Virginia, Reuther came to Detroit as a young man and began organizing the city’s auto industry labor force, becoming president of a UAW Local in 1936 and spearheading a number of high-profile worker strikes. He frequently locked horns with members of the area’s Italian mafia, who were often employed as strikebreakers and management muscle. In 1946, Reuther was elected president of the entire union and soon ran afoul with Perrone, a notorious strikebreaker for the Detroit Stove Works company, one of the biggest kitchen-stove manufacturers in the world. Perrone’s headquarters, The Canton Bar, was located across the street from Detroit Stove Works at the corner of Jefferson and Canton.

After returning home from work on the evening of April 20, 1948, Reuther was hit with a shotgun blast in his kitchen from a passing car. The UAW boss only survived the attack because he was struck in the shoulder, not the chest where the shooter was aiming. Reuther was hugging his wife when he was shot. His brother and fellow labor organizer, Victor, survived a similar shooting almost exactly a year later in May 1949.

Union official, convicted felon and Reuther rival Carl Bolton was charged in the Walter Reuther shooting, put on trial and acquitted in 1950. Then, in 1953, law enforcement caught a break – Perrone crew member Don Ritchie came forward to police in Windsor, Canada, who in turn brought in investigators and a state’s attorney from Detroit. The working-class U.S.-Canadian border town had long been mob territory belonging to the boys in nearby Michigan and from Prohibition into the 1960s the racket terrain in Windsor was overseen by Perrone’s ally, Detroit mafia capo Joseph (Cockeyed Joe) Catalanotte.

Ritchie, fresh off a prison sentence for burglary, demanded $25,000 in return for telling them who ordered the Reuther shooting and who carried it out. The state’s attorney agreed and the money was deposited into an escrow account in a Windsor bank.

With his dough secured, Richie and his government handlers holed up in the Park Shelton Hotel in downtown Detroit in late December 1953 and Richie spilled his guts. He told them that he was introduced to Perrone through his uncle and Perrone crew member Clarence Jacobs and that Perrone ordered him, Jacobs and Perrone’s top lieutenant Pete Lombardo to kill Reuther, which they were paid to do via Perrone’s son-in-law Carl Renda. According to Ritchie’s story, he was in the car and Lombardo at the wheel during the drive-by as his uncle pulled the trigger in the botched hit.

Santo Perrone, Carl Renda, Pete Lombardo and Clarence Jacobs were all arrested for the attempted murder of Walter Reuther on Jan 4, 1954. Within months, the payment to Ritchie was divulged, Richie fled state custody and the charges against Cockeyed Sam and his troops dropped. Renda went on to sue several of the law enforcement personnel and state’s attorneys involved in the building of the case against him and his father-in-law for malicious prosecution and got verdicts in his favor in six of the eight people named in the case.

Perrone didn’t have a very distinguished end to his career in the mob. By the early 1960s, he was feuding with newly-appointed Detroit mafia street boss Anthony (Tony Jack) Giacalone and Giacalone got the okay from crime family dignitaries, like his mentor, longtime don Joe Zerilli and his longtime consigliere Giovanni (Papa John) Priziola, – a one-time Perrone backer,- to kill him and his main enforcer “Tino” Lombardo. Giacalone was unsuccessful in murdering Perrone, instead just blowing off his leg in a January 1963 car bombing, but found the mark when disposing of Lombardo shortly thereafter.

Old-school mobster Perrone bristled at taking orders from a youngster like Giacalone. The decision to try to blow him up (not a typical Detroit mob murder tool) instead of shooting him was meant as a message. Perrone’s extortion trademark was torching businesses and blowing up cars of rivals. An underling of Giacalone had caught Lombardo trying to plant a bomb underneath Giacalone’s vehicle at Tony Jack’s then-headquarters, the Home Juice Company, won by him in a dice game years earlier.

Tony Jack never finished the job on Perrone. Once Perrone lost his leg and Lombardo was executed, Giacalone was instructed to cancel the contract on Cockeyed Sam’s life, as Zerilli and Priziola ruled that he should put on the shelf and stripped of his captain’s stripes instead. He would live another 10 years.