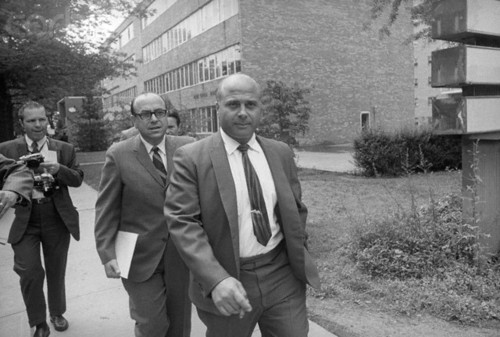 The Garden State Godfather has bid his Jersey mob empire adieu. Giovanni (John the Eagle) Riggi, the official mafia boss of New Jersey for more than the last 30 years, died earlier this week of natural causes. Released from a lengthy federal prison sentence in 2012, Riggi, 90, had been living quietly in Edison, New Jersey, per sources, still taking tribute cash as titular head of the organization, but having long since surrendered day-to-day control of the so-called DeCalvacante crime family he led in some fashion or another dating back to the 1970s.

Riggi took the reins of the syndicate from its namesake Simone (Sam the Plumber) DeCalvacante, first on an “acting” basis in the late-1970s and then as full-fledged don in the early-1980s upon Sam the Plumber’s voluntary retirement to Florida. Prior to ascending to the throne, he was a capo in the Family’s Elizabeth, New Jersey crew (the same regime DeCalvacante came up in) and crafted a reputation for himself as an expert labor-union racketeer.

From his seat of power in Elizabeth at Local 394 (LIUNA), Riggi held a vise-like grip on the Jersey construction trade for years.

“Not a single nail gets hammered into a wall in this state without us getting a piece of it (receiving a kickback),” he was recorded bragging to an associate on an FBI bug planted in his union office.

A military veteran, serving in World War II as an aircraft mechanic, the gruff and broad-shouldered Riggi left the U.S. army and joined DeCalvacante’s, eventually becoming Sam the Plumber’s protégé and top lieutenant on the street. He would hold court at Daphne’s Restaurant inside the Newark Airport Sheraton Hotel, a known mob congregating spot near Local 394 that the FBI installed cameras and listening devices inside to help build a case. Violence became a calling card of his. Riggi sanctioned the 1978 gangland murder of John Suarato, a reckless Garden State Goodfella, after he began harassing the family of one of his men, a move that ingratiated him to the rank-and-file in his first few years as acting boss. He allegedly had an in-law of his killed for a perceived slight.

Forced to resign his post as a business agent for the union, Riggi pled guilty to racketeering charges and was sent away to prison in the early 1990s, where he was said to still keep close tabs on his mob organization, never relinquishing his duties as boss while being locked away for two decades – choosing to run the syndicate through a series of street bosses and ruling panels. During his 22-year prison stay Riggi was saddled with another racketeering indictment, this one including a murder beef.

But it wasn’t the Suarato hit the feds wanted to nail him for. Instead, it was the 1989 gangland slaying of east coast mob associate and sketchy Staten Island businessman Fred Weis at the behest of legendary New York don John Gotti.

Fred Weiss did business with both the DeCalvacantes in Jersey and Gotti’s Gambino crime family in New York and was under indictment for a waste-hauling and hazardous-material dumping scam he was pulling in tandem with the pair of LCN Borgatas. Gotti worried Weiss was cooperating and at a wake in the late summer of 1989 he asked Riggi to arrange the particulars of his slaying as a favor to him personally. Riggi didn’t flinch. On Riggi’s instructions, DeCalvacante captain Anthony Rotundo dispatched aspiring button-men Vincent (Vinnie Ocean) Palermo and Anthony Capo, and several others in the Family, to clip Weiss. The assembled assassin squad found him leaving his girlfriend’s condominium and getting into his jeep on the morning of September 11, 1989.

Palermo (the trigger man in his uncle John Suarato’s murder) and Capo ambushed and shot Weiss multiple times at close range, leaving him dead in a pool of his own blood. Shortly thereafter, Palermo and Capo were “made” into the mafia by Riggi for their effort. The FBI believes Riggi quickly ordered a follow-up murder in a maneuver to try and eliminate weak links in the conspiracy. Joe Garafano, one of the crash car drivers in the Weiss hit, was set up by Rotundo and slain in the months following Weiss’ killing.

Two years later, Riggi signed off on the execution of deposed syndicate underboss and Sam DeCalvacante’s former right-hand man Louis (Fat Louie) LaRasso, from his prison cell for his continually subversive behavior, according to court records. LaRasso disappeared in November 1991 on the afternoon of his 65th birthday. His remains have never been unearthed.

Pleading guilty to racketeering offenses and the Weiss slaying, Riggi got an additional 10 years tacked on to his sentence in a case where his son-in-law, Sean Richard, the man in charge of overseeing Riggi’s interests in the labor-union community with him away behind bars, was a key informant. Richard jointed Team U.S.A. in the first weeks of 2000 after learning he was on the verge of being indicted and the Lucchese crime family, fearing that his potential cooperation could harm its leadership structure, had issued a contract on his life.

Vinnie Ocean, Sam the Plumber’s nephew via marriage, rose to the job of DeCalvacante clan street boss in the late 1990s. Like Richard, Rotundo, Palermo and Capo all ended up flipping and entering the Federal Witness Protection Program as well.

In 2009, John Gotti’s two emissaries in the Weiss murder conspiracy, John (Jackie the Nose) D’Amico and Joseph (Joe the German) Watts were charged with participating in the gangland homicide. D’Amico, one of Gotti’s successors as boss of the Gambinos in the 2000s, pled to a lesser count and did a small prison sentence. Watts, one of the New York mafia’s most respected and highest-ranking non-Italians and someone authorities link to at least a dozen mob hits, was convicted of the Weiss murder and received 13-year sentence.  Gotti died in prison of cancer in 2002.

Riggi’s legacy in the Garden State rackets is proudly carried on through his son, Manny, said to be a ranking member of the Jersey mob today. Sicilian-born Frank Guarraci was Riggi’s most recent street boss and could be in line to replace him.

Those in the law enforcement community familiar with Riggi note his longevity and resolve.

“John Riggi was a throwback alright, they (the old school dons) keep dying off….he lasted longer than most, though” remarked one former U.S. Prosecutor in North Jersey assigned to numerous organized crime task forces in 33 years on the job. “He was the kind of guy that didn’t make any apologies for who he was, a little rough around the edges, but he always carried himself with a regal flair for the business he was in. Tough, fierce, forceful, all those alpha male traits apply, yet he was said to have a soft side, giving to charities, donating ballfields around town and such. At the end of the day, he was a true racketeer, a true hoodlum. It was an image he didn’t shy away from. And in this day and age with bosses and underbosses flipping right and left, his being willing to do a 20-pop in the can and his ability to stay in charge for the most part that entire time, only enhanced his reputation in that underworld circle.”

New Jersey mafia associate Nick DeGidio recently copped a plea in the federal racketeering, attempted murder and narcotics conspiracy case he and nine other DeCalvacante syndicate figures were slapped with back in the spring. The lead defendant in the case is alleged New Jersey mob capo Charles (Charlie the Hat) Stango, a convicted murderer. Also included in the indictment is reputed DeCalvacante consigliere Frank (Goombah Frankie) Nigro.

The 37-year old DeGidio is the first person charged to plea out as the others wait for their trial date to be set. He admitted to selling close to a $100,000 of cocaine to an undercover FBI agent and faces up to 40 decades in prison and a five million dollar fine when sentenced this September. Per the indictment, DeGidio was in Stango’s crew.

Charlie Stango, also known as “Beeps” or “Beepsie,” was living in Las Vegas at the time of his arrest in March and running his crew in Jersey through his son and his and DeGidio’s co-defendant Anthony (Whitey) Stango. The indictment alleges the elder Stango tried taking out a murder contract on rival DeCalvacante wiseguy Luigi (Lou the Dog) Oliveri. Back in 2003, he was imprisoned for his role in an unsuccessful murder plot. In 1981, Charlie Stango and two other mobsters wacked a mafia associate named Billy Mann as a favor to the Genovese crime family’s capo in New Jersey, Tino (The Greek) Fiumara. Mann had reportedly ripped off a member of Fiumara’s crew in a drug deal. Stango did 12 years for the Mann homicide.