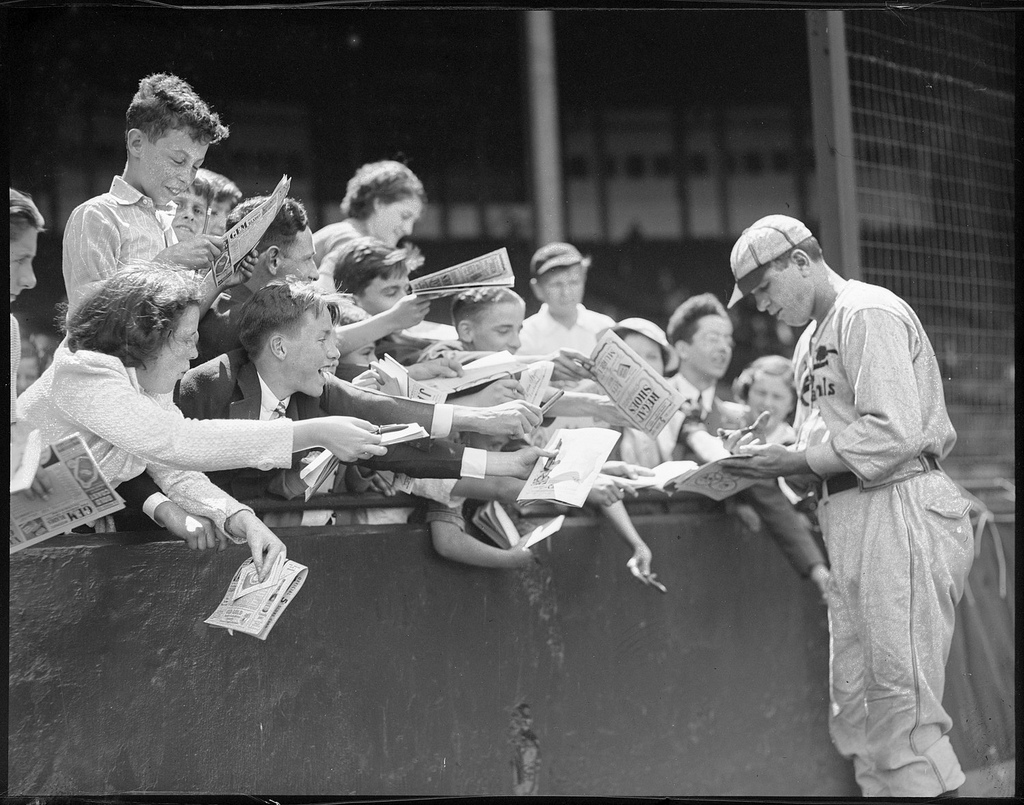 What do imprisoned Detroit mafia associate Mitchell (Steady Eddie) Karam and St. Louis Cardinals legend and MLB Hall of Fame pitcher Jerome (Dizzy) Dean have in common? They were both unindicted co-conspirators in a big 1970 Motor City mob gambling bust, which nailed major Michigan underworld figures, Donald (Donnie Dice) Dawson and Jack (Fat Jackie) Lucido. An unindicted coconspirator is a person the grand jury considers a part of the illegal activity taking place, but doesn’t think there is enough hard evidence against them to earn an eventual conviction.

The colorful and universally-popular Dizzy Dean, 60 years old and a television broadcaster at the time of the February 1970 federal indictment, died of natural causes in Nevada four years later. He sternly denied any links to organized crime in his comments to the press following the news breaking of his ties to the case.

Dawson was a renowned point-spread manipulator in his day. Karam, who learned the tricks of the sports-fix trade from the “Dice Man,” is expected to be sentenced to six years behind bars for his role in masterminding the University of Toledo football and basketball point-shaving scam at the end of the month. That federal indictment came down in 2009 and he pled guilty in 2013. His co-ring leader in the game-fixing operation, Gary (the Cigarette) Manni, was slapped with a six-year term Tuesday. Steady Eddie has been incarcerated on horserace-fixing and bank fraud charges since 2012.

The 58-year old Manni, already serving time for a food-stamp scam being run out of his family-owned grocery store and illegal firearm-and-weapons possession, and Karam, 84, both spawn from the large contingent of Middle-Eastern hoodlums conducting business in the Detroit area. Manni (Iraqi) got his start in the rackets as Karam’s driver. Karam (half-Iraqi-half Lebanese) has allegedly been a part of the Detroit mafia’s notorious Giacalone crew for the last three and a half decades, per sources. Before his incarceration, he had been developing real estate.

Back as an aspiring wiseguy in the 1960s, Karam was schooled by Dice Dawson.

Possibly the largest bookmaker in the whole Midwest when the 1970 indictment was filed and definitely the most prolific handicapper in the state of Michigan, Dawson was an expert game-fixer dating back to the early 1950s. Lucido, tagged by prosecutors as Dawson’s No. 2 in charge of the multi-million-dollar-a-year sports book, would go on to become a capo in the Detroit crime family in the years after the bust. Both pled guilty in the case.

Elected to the baseball Hall of Fame in 1953, Dean was known as a heavy gambler in his days as an All-Star pitcher. While the ace of the Cardinals’ vaunted “Gashouse Gang” of the 1930s, winning MVP of the National League and guiding the franchise to a Word Series championship in 1934. Dean led the “Bigs” in strikeouts four separate seasons and racked up 150 total wins. His jersey No. 17 was retired by the St. Louis organization upon him dying in 1974.

He had some reputed demons though. MLB Commissioner Kennesaw Mountain Landis was so worried about Dean’s gambling habits at the peak of his career in the mid-to-late 1930s, he hired a former FBI agent to keep tabs on him off the field, per court records connected to the gambling case in 1970.

The FBI raided the residences of Dean, Dawson, Lucido and Karam on New Year’s Day 1970. Dean was living in a Las Vegas hotel, the rest in Metro Detroit. Dizzy’s nephew, Paul Dean, Jr. the son of his baby brother, fellow Gas House Gang hurler Paul (Daffy) Dean, was also named an unindicted coconspirator in the case. The indictment alleged Dizzy delivered a $6,000 payoff from a Lansing, Michigan businessman and political powerbroker to the mob in Detroit. According to sources in federal law enforcement close to the investigation, Dizzy cooperated with authorities to avoid being indicted.

The same week the indictment hit in February, Detroit Tigers’ All-Star Pitcher and Cy Young-winner Denny McClain was suspended by MLB for his connection to an underworld gambling ring in Flint, Michigan, a smoky factory town 45 miles north of the Motor City. Rackets in the Flint area were overseen by the Ruggirello brothers (Luigi aka “Louie the Bulldog” and Antonino, Jr. aka “Tony the Exterminator”) in the 1970s. The Ruggirello’s were sent away to prison later on in the decade for attempting to blow-up a renegade numbers operator in a car bomb.

McClain had a Sports Illustrated article in early 1970 tie his foot injury that caused him to miss a key chunk of the 1967 A.L. pennant race to a physical confrontation with Detroit mafia capo Vito (Billy Jack) Giacalone over McClain’s unpaid gambling debts. Dean and McClain are the last two MLB pitchers to win 30 games in a single season in the “the Show,” – Dean in the N.L. in 1934, McClain in the A.L. in 1968.

The 1970 indictment brought an end to the gangland career of Dice Dawson, a legendary bookie and king of the point-shave. This is the man that a young Steady Eddie studied under to learn how to fix professional sporting events. Unlike his student, Dawson never got arrested for it. He did like to boast about it though.

In an interview with award-winning author Dan Moldea for Moldea’s book “Interference — How Organized Crime Influences Pro Football” (1989), Dawson admitted to coordinating point-shaving schemes in more than 30 NFL games throughout the 1950s and 60s. His friendships with NFL Hall of Fame quarterbacks Bobby Layne and Len Dawson raised eyebrows in the league office. Dice Dawson admitted to using Layne to fix Detroit Lions games in the 1950s. Len Dawson (no relation to Dice) had his name surface as part of the feds case in Detroit in 1970, pegged a major gambler with the Kansas City mafia in the Missouri area where Dice Dawson held additional interests in gambling operations. Lions Hall of Fame defensive lineman and future Hollywood actor Alex Karras’ season-long suspension by the NFL in 1963 was partially linked to his association to Dice Dawson.

Karras and Layne were often observed in Dice Dawson’s company at Dawson’s restaurant headquarters, The Fox and Hounds, in the heart of swanky Bloomfield Hills, a suburb less than 10 miles outside of Detroit and home to large, neatly-preened estate upon estate of auto executives, CEOs and the old-money manor born. By the late 1950s, Dawson was spending so much time at the restaurant and high-end cocktail lounge, he bought it.

Built in 1927 at the corner of Long Lake Road and Woodward Avenue, throughout its 80-year existence, the castle-shaped Fox and Hounds was a dining staple for high society in Southeastern Michigan. Closing its doors in 2007, the posh restaurant and its grounds have since been transformed into a strip mall.

Born and raised in Detroit, Dawson’s dad owned a string of Chevrolet car dealerships and through business his dad did with the Lions organization he got a job as a ball boy for the pro football franchise as a teenager. Local street lore traces his nickname, “Dice,” to his prowess shooting craps with the players on the team bus and in the locker room. For decades, the Lions held their summer training camp at Cranbrook Kingswood, an east coast-style prep school, a half-mile down the road from The Fox and Hounds, where players as far back as the 1930s used to congregate for long hours of drinking and carousing.

Attending college at Holy Cross and then serving in the Marine Corps in World War II, Dawson returned home to the Motor City after his time in the military to take a job selling cars at one of his father’s dealerships. Within months, he was gravitating towards members of organized crime and in the late 1940s began work as a bookie under the auspice of Fat Jackie Lucido’s uncle and surrogate dad, Salvatore (Sammy Lou) Lucido and Billy Giacalone, the pair of men in charge of all sports gambling for the mob in the Detroit area in the mid-to-late 20th Century. He quickly rose in the ranks to being the most influential and successful bookmaker in Michigan with a stable of mafia goons and no-neck thugs at his disposal for collection and intimidation purposes.

When he was arrested in 1970 along with nine others (added to the five unindicted co-conspirators), the U.S Department of Justice hailed the bust as taking down “one of the biggest and most influential bookmaking rings and bookmakers in the country.” Serving nearly eight years in prison, Dawson was released in 1978 and retired to Las Vegas, allegedly living off his previously-garnered illegal earnings until the day he died of old age in 2012.

Fat Jack Lucido assumed command of Sammy Lou’s crew upon Sammy Lou’s passing in 1985. He died himself in 1995 under federal indictment for a gambling and racketeering case he got hit with two years prior.