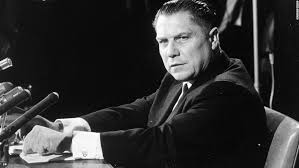 January 3, 2022 –Uncle Sam was busy running across the country running down leads in the Jimmy Hoffa kidnapping and murder case in 2021. Months before the FBI got a search warrant back in the fall to go looking for the long-missing slain Teamsters boss at the former site of a mobbed-up trash dump in New Jersey underneath the Pulaski Skyway, Team USA went sniffing around a Georgia golf course in search for his remains.

Last spring, a Fox News Channel report by Eric Shawn explored the claim by an aging Georgia attorney that the Chicago mob’s Luigi (Lou the Tailor) Rosanova buried Hoffa on the grounds of the upscale Savannah resort and golf club he oversaw. FBI agents traveled down to Savannah in April 2021 to track the lead. In October, with search warrant in hand, FBI agents took an above-ground electronic survey of the one-time Jersey landfill owned by Garden State mafia soldier Phil (Brother) Moscato. According to sources familliar with the investigation, the feds have the green-light to break ground in both locations, but there are no indications when exactly either dig will or may take place.

The 62-year old Hoffa vanished from a Bloomfield Township, Michigan restaurant parking lot on the afternoon of July 30, 1975 on his way to meet Detroit mafia street boss Anthony (Tony Jack) Giacalone and New Jersey mob capo Anthony (Tony Pro) Provenzano to discuss Hoffa’s desire to reclaim the Teamsters presidency in an upcoming election. Hoffa, who was forced to relinquish power in the union to get out of prison early on a federal fraud and bribery case, had come to loggerheads with his former benefactors in the mafia when he struck out on a campaign to win back the Teamsters’ top spot against their approval.

Giacalone (d. 2001) was Hoffa’s point man for mob-related labor union matters dating back to the days following WWII. Provenzano (d. 1988), a labor union powerbroker on the east coast with no equals at the zenith of his career, and Hoffa were close friends turned bitter enemies, stemming from a dispute in prison related to Teamsters insurance benefits Hoffa’s family was receiving and Provenzano’s family was not. Hoffa needed Provenzano’s backing for his presidential bid.

At the time Hoffa went missing, “Brother” Moscato was one of the biggest loan sharks on the east coast and one of the main lieutenants in Tony Pro’s Union City, New Jersey mob crew that served as a wing of New York’s Genovese crime family. His headquarters was the PJP Landfill in Jersey City.

In the final years of his life, Moscato became a source for legendary Hoffa researcher and investigative reporter Dan Moldea and told Moldea that he had been tasked with burying Hoffa’s body on PJP Landfill property. After Moscato died of natural causes in the 2014, his partner in PJP Landfill, Paul Cappola’s son, Frank, took Moldea to the parcel of land now located on a state park and nature preserve.

Moscato was alleged to have passed on the responsibility of putting Hoffa’s body into the ground to Paul Cappola. Shawn and Fox News Channel did a ground-penetrating radar analysis of the property, based on what Paul had shown Frank via Moldea’s research, and found a series of metal drums just under the surface of the earth appearing to be the ones Paul Cappola left as a marker for the burial ground. The FBI searched the PJP in the months immediately following Hoffa’s disappearance 47 years ago, — per a tip from another member of Tony Pro’s inner circle — but didn’t find anything of substance.

Shawn’s ongoing probe into the Hoffa hit on Fox Nation’s Riddle broadcast through the cable news giant’s streaming service has been at the forefront of developments in the historic case since it launched in 2019. Paul Cappola was interviewed by Shawn in the docu-series prior to his death in 2020 from a lung disease.

While Moscato was a “made man” in the mob, neither of the Cappola’s were. Both were tabbed “mob associates” by the FBI. None of them had direct ties to the Teamsters icon himself, the city of Detroit where Hoffa disappeared from, nor the Tocco-Zerilli crime family, the group the FBI believes was at the helm of the conspiracy to murder and dispose of the testy labor chief.

“Lou the Tailor,” on the other hand, could be connected to both the Detroit mafia and Tony Pro’s branch of the NY-NJ mob as well as Hoffa, the man. Rosanova vacationed with Hoffa’s vice-president and eventual successor and rival, Frank Fitzsimmons, in the Bahamas in 1971 and 1972, respectively, per Rosanova’s FBI file. Hoffa, Fitzsimmons and Rosanova went on hunting trips together in the years preceding Hoffa’s incarceration.

In April, Shawn and Fox News broke the news of a potential FBI dig for Hoffa’s remains in Savannah, Georgia based on statements from Lou the Tailor’s former lawyer, Reggie (Bubba) Haupt. Rosanova died of natural causes in 2003 at age 81. In July 1975, Lou the Tailor ran the stately Savannah Inn & Country Club, a well-known mobster getaway destination south of the Mason-Dixon Line and a frequent site of Teamsters union conferences and maf

Haupt, himself an institution in criminal defense law in Savanah for decades, claims Lou the Tailor he told him that he buried Hoffa on the club’s golf course. Major renovations for the historic club were financed by a 1966 Teamsters pension fund loan Hoffa helped push through at the last minute, according to Rosanova’s FBI file. Upon the renovations being completed, Rosanova moved from Chicago to Georgia and took control of the club as Executive Director of Operations.

Lou Rosanova was a fast-riser in Outfit circles in the 1950s and 60s, ingratiating himself with Chicago mob brass fresh off a brief pro football career. Rosanova was a tailback on the Chicago Bears “taxi squad” (today known as a practice squad) for a couple of seasons before hanging up his cleats and going into the rackets. He immediately began acting as a bodyguard for some of the Outfit’s biggest shot callers, including bosses Tony (The Big Tuna) Accardo and Sam (Momo) Giancana.

Known for his suave demeanor and dapper attire, Rosanova opened up an upscale men’s clothier in downtown Chicago. The shop became a beehive of organized crime sit-downs, meet ups and social gab sessions for top Outfit leaders. Still, many of the Windy City’s most famous athletes, lawyers, judges and politicians bought their clothes and had them fitted there.

According to his FBI file, in around 1964 Lou the Tailor was selected to be part of an elite crew of Chicago mob “representarios,” soldiers in high standing within the syndicate selected to represent the Outfit’s interests outside of Illinois, troubleshooting for the Chicago crime family around the country in places like Florida, Arizona, California, New York and Detroit. Large portions of that troubleshooting was labor-union related and Rosanova provided Hoffa’s Teamsters muscle on construction sites and Hollywood movie sets. Lou the Tailor and Hoffa socialized on a number of occasions through the years, most notably attending a series of pro sporting events together, according to Rosanova’s FBI file.

When Rosanova took over operations at the Savannah Inn & Country Club, the swanky enclave located on Wilmington Island on the shores of the Savannah River, became a melting pot of mob figures, union heavyweights, celebrities and corporate CEOs. Two FBI informants placed at least three of the suspected conspirators in the Hoffa kidnapping and murder case eating at the same table with Rosanova in the club’s plush dining room two weeks before Hoffa vanished, per Rosanova’s fed jacket.

The FBI had an interest in Rosanova in the early stages of its quest to find Hoffa’s body, per Chicago Crime Commission files, bringing him in for questioning on at least two occasions in 1976 and 1978. Haupt accompanied Rosanova on these meetings with the feds.

Eventually, Haupt says, Rosanova spilled the beans to him on what happened to Hoffa during a golf outing. Over the years, Haupt had noticed Rosanova and other mobsters golfing at the Savannah Inn & Country Club often stopped on the ninth hole and urinated. After one such incident, Haupt says Lou the Tailor leaned in closely and whispered, “I never told you this, but that’s where Jimmy Hoffa is buried,” pointing at the ninth hole. Rosanova told him that Hoffa was flown into Savannah on a Beechcraft King Airplane in the hours after he was kidnapped and killed in Detroit.

Per sources familiar with the Rosanova theory, the FBI can tie Lou the Tailor to multiple Detroit mob crews of the era. FBI surveillance logs note Rosanova meeting with a succession of Detroit mafia captains throughout the 1970s in both social and business settings in Florida, California, Arizona and at the Savannah Inn & Country Club down in the Peach State. Those capos included Peter (Bozzy) Vitale, Raffaele (Jimmy the Goon) Quasarano, Michael (Big Mike) Polizzi and Tony (The Bull) Corrado.

One FBI internal office memo cites informants telling agents that Rosanova was involved in narcotics trafficking with Bozzy Vitale, Big Mike Polizzi and Jimmy Quasarano. Vitale and Quasarano were known by agents to partner in drug activities in the previous decades. Polizzi was considered the Detroit mob’s money man or “CFO,” having earned an accounting degree from Syracuse University.

FBI agents followed Vitale and “Jimmy Q,” to New York in the days following Jimmy Hoffa’s disappearance to meet with Commission dons at a Harlem social club and in Manhattan at a private dinner hosted at the original Vesuvio Restaurant on 48th Street. Vitale, Quasarano and Corrado’s trash company, Central Sanitation, burned down in a suspected arson fire shortly after Hoffa went missing and before authorities could get a search warrant to examine the company’s incinerator.

The old Savannah Inn became a Sheraton Hotel and shuttered for a short period of time in 1988. Today, the property is known as the Savannah Country Club.