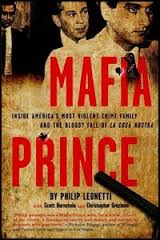 Sitting in a plush sofa chair in the lobby of a swanky Miami hotel in the winter of 2011, I looked for him through a room full of people, not having any idea what I was actually looking for.

It was late afternoon and the hotel was bustling. I was eager to meet the man I had read so much about and whose story in a lot of ways led me down my own personal career path to becoming an author. My expectations were endless, yet at the same time I didn’t have any idea what to expect.

Gazing across the crowded lobby, I studied dozens of faces, thinking maybe I would recognize him. Would he look the same as the pictures I had seen? Did he alter his appearance to try to hide his identity?

Over a decade into the new millennium, he was a myth, a ghost, a rumor. When people spoke of him it was strictly in the past tense. Nobody had heard from him in years. It was like he had fallen off the face of the earth. And he had; intentionally and understandably so.

But somehow I had found him. Or should I say, he found me.

at my desk at my newspaper. The voice on the other end of the line was upbeat and all business from the very start. He told me he had enjoyed reading one of my previous books, which chronicled life in the Chicago mafia.

Wasting little time with small talk, he informed me he was in contact with Phil Leonetti, the almost-mythical former mob prince who oversaw large portions of the East Coast underworld by the time he was 30 years old and was the nephew of Nicodemo “Little Nicky” Scarfo, one of the most vicious mafia dons in American history. Long off the radar, Leonetti, once as prolific a moneymaker as he was an assassin under the tutelage of his uncle, was interested in finally telling his story, the voice said, and he wanted me to write it.

To say I was excited was the understatement of the century. Reading previous third-hand accounts about Leonetti’s brutal rise inside the mob family him and his uncle controlled through brazen acts of wanton violence and Machiavellian-type scheming had inspired me to embark on a life of writing about the underworld for a living.

For years, I had been trying to figure out a way to get in touch with him so I could try to convince him to write his story with me. However, for every two steps forward I got in my endeavor to track him down, I fell four steps back. More than one person told me it would never happen and to give up my search. Eventually, I did. By 2010, I had pretty much abandoned the idea.

Then, out of nowhere, it falls in my lap. An hour after hanging up the phone, I was still in a state of shock. My anticipation was palpable. I could taste it.

This was the perfect book, an epic tale of the mafia in its prime. All the great mob stories had already been told. From Capone to Gambino to Gotti, they had all been written, all except for one – his. Besides him, there was no one left.

Throughout most of the 1980s Philip Leonetti was one of the most powerful men in the entire country. In the United States Italian underworld, known as “La Cosa Nostra”, there were few bigger. He was the heir to a vast criminal empire built by his bloodthirsty uncle, the mob’s golden boy tapped with looking after the golden goose – Atlantic City.

That was two decades ago. Since then Leonetti faded into oblivion. He disappeared into the shadows, content blending in, living life as a civilian, a square, far from the neon lights of the Atlantic City Boardwalk he once ruled over and the ultra-violent world he once thrived and prospered in.

With each passing day he’s been gone, his legacy has grown. He was on top during the American mob’s final heyday and he is one of the only ones, if not the only one, that isn’t dead or serving life in prison.

Now he was in Miami. And I was set to meet up with him in the lobby of this hotel. I didn’t know where he was coming from, where he lived or anything about his current personal situation. Besides having a brief conversation on the phone to exchange pleasantries a few days prior, I knew nothing more than what I had read or watched on TV. I was told to be in Miami at a certain hotel at a certain time and I was. That was it.

I kept looking and couldn’t spot him. For a brief moment, I thought maybe he had gotten cold feet and decided not to show up. Suddenly, he appeared. He was in front of me. He went to shake my hand and said, “Hi Scott, I’m Philip Leonetti.”

Taking a moment to let the introduction sink in, I almost didn’t recognize him. He definitely wasn’t what I expected. Thinking back, I don’t know what I really expected. Did I expect to see a superhero?, a super villain?, a character out of a Sopranos episode? Whatever it was, it wasn’t the man standing in front of me.

He was slight and bespectacled and had the air of a small town accountant not a deranged killer that some accounts had painted him to be. Soft-spoken and polite, he was understated, extremely ordinary looking. But, in reality, he was far from ordinary. Ordinary people don’t kill other people.

Fit and tan, he seemed relaxed as we chatted briefly in the busy hotel lobby. There were herds of people moving about in our vicinity, none of them had any idea they were in the presence of a man with a half-million dollar murder contract sitting on his head. Where did the contract come from you ask? Well, let’s just say it came from one of the world’s most ruthless crime lords of the last century, who just happens to be his uncle and rotting away the rest of his life in a dusty prison cell, while he and I get acquainted in the lobby of a fancy South Florida hotel.

Although he had once been a shark swimming in a sea of other deadly and bloodthirsty sharks, now he was simply a man. He was a man with a story to tell.

Within minutes we were sitting in his hotel suite and he was giving me chapter and verse about his life inside and the mob and out. I got the rundown on his entire life – the good, the bad, the ugly and the sweet. No stone was left unturned.

And whatever I thought I knew, believe me, I didn’t have any clue. As great of a story as I knew I had, it was ten-times greater.