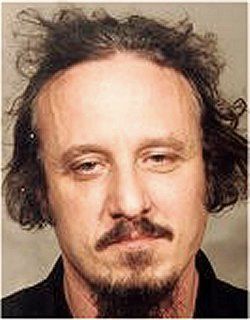 April 21, 2021 — U.S. District Court Judge Lynn Adelman has granted former Chicago biker boss Orville (Orvie the Anvil) Cochran a compassionate release due to his contraction of the COVID-19 virus and influence from the First Step Act. Cochran walked free last month and is living back on the South Side of Chicago, per the Chicago Sun-Times newspaper. U.S Attorneys in Chicago objected to the ruling and any early release for Cochran, a man they consider dangerous and deadly.

The wild-eyed Cochran, who was on the run from the law for 16 years before being nabbed in a Chicagoland supermarket for shoplifting in 2017, once led The Outlaws Motorcycle Club’s incredibly powerful South Side chapter. The Chicago Outlaws’ South Side chapter is known as the “Mother Ship” because it planted the club’s first flag.

Cochran pleaded guilty to racketeering charges out of Milwaukee back in 2018 and was sentenced to five years in prison. He was slated to be released in the weeks prior to Thanksgiving if Judge Adelman hadn’t have let him out in March. The First Step Act was signed into effect by former President Donald Trump in 2018, creating judicial measures to allow sentence relief for non-violent offenders serving excessive prison terms.

Federal authorities still consider Cochran a suspect in at least three gangland homicides; the 1994 Michael (Mad Mike) Quale murder, the 1995 Jack (4-by-4) Castle hit and the 1999 Thomas (West Side Tommy) Stimac slaying. Quale and Castle were leaders in the rival Hells Angels

The Outlaws and Hells Angels have been at war with each other since the 1970s. Tensions rose particularly high in the Windy City back in the 1990s. Cochran was originally charged in the Quale and Castle killings, but had the charges dropped when he agreed to plead guilty to a series of racketeering counts.

The FBI visited Cochran in his Minnesota prison cell three years ago to try and squeeze him for information on the 1999 West Side Tommy Stimac hit, which according to sources in Chicago law enforcement, remains an active investigation. Stimac was a legend in Outlaws MC circles and ran the “Mother Ship” in the 1970s and 80s.

Per police records and internal FBI memos, Cochran and Stimac were feuding over a woman and control of the club’s South Side chapter. West Side Tommy was responsible for forging long-lasting ties between the Outlaws and Chicago’s Italian mafia, known locally as, “The Outfit.” Stimac was gunned down on his back porch as he puffed on his nightly after-dinner cigar on the evening of July 27, 1999 in Lemont Township, Illinois.

Quale headed the Hells Angels chapter in Rochester, New York and was stabbed to death in a brawl at a racetrack. Castle was part of a growing presence of Hells Angels in Chicago in the early 1990s, part of a Midwest expansion effort launched by the West Coast-based club at the time. He was shot dead behind the wheel of his truck.

Informants have told investigators that Stimac offered Cochran $10,000 in cash in the spring of 1999 to settle their differences, but Cochran rejected the offer. Weeks after the offer was made and rebuffed, Cochran survived an assassination attempt outside the South Side chapter clubhouse. Orvie the Anvil insisted the attempt on his life came on Stimac’s orders and sought vengeance, per sources in law enforcement.