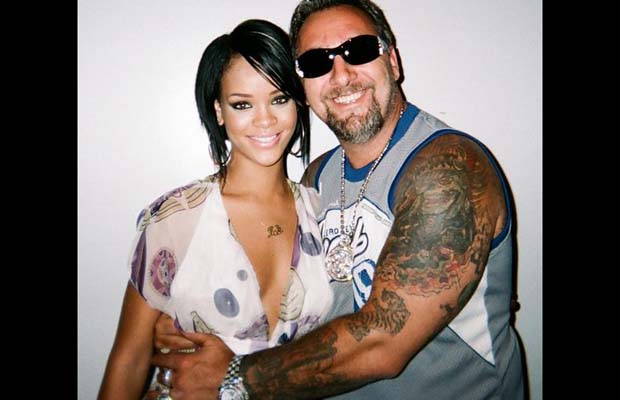 METRO VANCOUVER – The tinted window of the classic white car rolls down to reveal the stony face of Hells Angel Hal Bruce Porteous.
He beckons to an awestruck teen who leaves his bike behind and gets into the car.

This is the opening scene of a rap music video starring Porteous, a Vancouver member of the notorious motorcycle gang who sings under the name Hal Heffner.

A Vancouver Sun investigation has uncovered dozens of online photos and videos featuring Porteous, sometimes in Angels colours, posing with scantily clad women and partying with friends. Other images show him backstage with pop stars Fergie, Rihanna and Swollen Members.
He promotes himself as an “old school gangster” in music videos for such songs as Do Ur Time, Living Large and the self-titled OSG. He’s draped in gold chains and surrounded by flashy cars and women in bikinis.

One of the men featured with Porteous in some of the photos and a video is Robert J. Shannon, a Maple Ridge trucker who pleaded guilty this week in Seattle to conspiracy to distribute cocaine and marijuana, as well as money-laundering. The U.S. alleges the drug ring operated for the benefit of the Hells Angels.

Police and criminologists say the gangster imagery of Porteous’s music and the fact he is a real-life full-patch member of an alleged criminal organization make for a disturbing mix.

Criminologist Darryl Plecas of the University of the Fraser Valley said the “messaging” in Porteous’s songs can entice youth to the gang lifestyle.
“This particular kind of negative messaging just can’t be good news,” Plecas said Wednesday.

“The more people are exposed to what could be called negative definitions and negative experiences, you increase the probability that you are going to end up in crime. The name of the game is to reduce the number of negative influences.”

There is no lack of flash in Porteous’s OSG video, which starts in black and white with the boy being taken into the limo and introduced to men dressed in Mafia-like suits, sunglasses and hats. When the video moves to colour and modern times, Porteous raps while a bundle of cash flies through a counting machine.