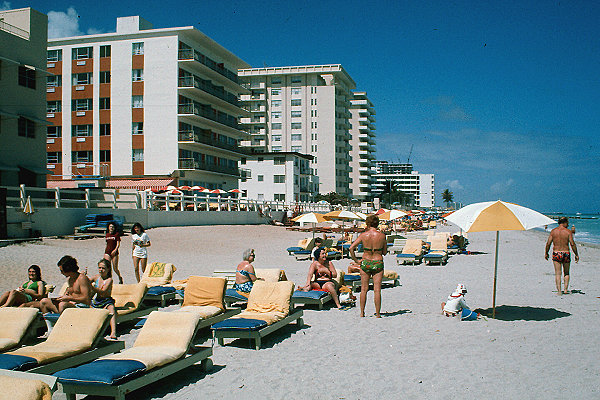 Those blustery, bitterly-cold Motor City winters have long seen mobsters from Detroit scurrying for the warmth of sunny Florida. The relationship between the mafia in Michigan and the Sunshine State dates back to the days right after Prohibition, when Detroit mob captain Joseph (Beach Bum Joe) Massei settled in Miami in the 1930s.

Massei, who was half-Irish, but born in Sicily, rose through the ranks of the Midwest underworld as a co-leader of Detroit’s River Gang bootlegging syndicate, becoming rich on smuggled booze from Canada, alongside his close friend and River Gang boss Peter (Horseface Pete) Licavoli. The pair helped create the city of Detroit’s La Cosa Nostra family in 1931, known locally as “The Combination,” or “The Partnership,” due to the fact that it brought all the region’s various bootlegging crews under a single banner. They were both tabbed capos in the new regime by family “founders” Joseph (Joe Uno) Zerilli and William (Black Bill) Tocco.

In 1932, Massei and Licavoli were indicted for murdering St. Louis gangster Milford Jones inside the Stork Club, a popular mob hangout and speakeasy on Detroit’s eastside. The charges were dropped before trial and within a few years Massei departed for the sandy beaches of South Florida, spawning his nickname.

From the moment he stepped foot in Florida around 1935, taking over a penthouse suite at the Grand Hotel on 23rd Street in Miami Beach, Massei opened up shop on bookmaking, loansharking and wire-room activity. He fronted his illegal endeavors with a legitimate business, Miami Provisions, and strong-armed his way into doing virtually all of the deliveries of produce and grocery products to the city’s many hotels and resorts.

Much like back home in Michigan, where the inner-circle LCN figures and their families lived in a two-block area in posh Grosse Pointe Park, known as “The Compound,” their houses and apartments in the Miami area were all within close proximity to one another. While Corrado, Zerilli’s and Tocco’s brother-in-law, spent the New Year’s holiday in Miami in 1957, he dropped dead of a massive heart attack at only 54 years old as he swam in his backyard pool.

FBI agents trailed Detroit mobsters, Billy Jack Giacalone, Matthew (Mike the Enforcer) Rubino, Anthony (Tony Z) Zerilli and Anthony (Tony the Bull) Corrado to Miami in January 1963 and observed the four mafia powers – Tony Z was the son of Rustbelt Godfather Joe Zerilli, Tony the Bull was Pete Corrado’s youngest son – meeting with Massei and obtaining NFL-authorized field passes to watch the Detroit Lions’ 17-10 victory over the Pittsburgh Steelers in the first-round of the playoffs from the sidelines at the Orange Bowl.

Giacalone, Zerilli and Corrado were linked to the 1950s and 60s-era Lions, investigated for point-shaving and their relationship to All-Pro defensive lineman, team captain and future Hollywood actor Alex Karras, eventually resulting in Karras season-long suspension imposed by the NFL in the months after the FBI reported the Detroit gangster contingent’s presence on the field in the ’63 playoffs to the league.

The Giacalone brothers’ predecessors as syndicate street boss, the equally-formidable Joseph (Scarface Joe) Bommarito, was forced into retirement down in Miami Beach in 1958 due being stricken with multiple sclerosis. Scarface Joe, a former partner of Massei’s in the River Gang back in the Motor City during Prohibition and a man, like the Giacalones, suspected in carrying out or ordering dozens of mob hits in his day, died in Florida in 1965.

Beach Bum Joe Massei died of natural causes in 1971, Black Bill Tocco, who had joined him in Miami on a full-time basis in the 1950s, passed away a year later in 1972, however, Detroit LCN kept a foothold in Florida even with them gone. The “second-generation” of the Detroit mob, a group made up of the sons of nephews of the crime family’s founding fathers, led by Giacomo (Black Jack) Tocco, Black Bill’s oldest son and Tony Zerilli, the syndicate’s new boss and underboss, respectively, remained drenched in the Florida sun – Black Jack assumed command of the organization upon his uncle Joe Zerilli’s death of natural causes in 1977, on the heels of heading the Detroit mafia for over 40 years and holding a seat on the natio

The FBI snapped surveillance photos of the comings-and-goings at a January 22, 1983 meet-up of mob dons from Detroit and St. Louis at a Pompano Beach, Florida Hilton Hotel. Detroit Godfather Jack Tocco, flanked by capo Tony Corrado and St. Louis LCN boss Mike Trupiano, a boyhood friend of Tocco’s in Michigan, accompanied by high-ranking Missouri mafia associate Sorkis (Sorkie Blue Eyes) Webbe, holed up in a penthouse suite and discussed the sale of their joint hidden-ownership in the Aladdin Hotel and Casino in Las Vegas, for the entire day.

The face-to-face between Tocco and Trupiano was used as evidence at Tocco’s RICO trial in 1998, which concluded with convictions for Black Jack and most of his administration. Tony Z was convicted by a jury at a 2002 trial. Tocco was actually at his home in Florida when the indictment dropped in March 1996.

Quick getaways to the beach weren’t always to avoid the bad weather back home.

“Those guys would go down to Miami in the winter, most of the time it was to get away from their wives and to be with their girlfriends,” former Detroit FBI agent Mike Carone said. “They had roots there from all the way back to the 1930s, they would mostly stick to themselves and tried to keep a low profile. The violence and hardcore stuff was left back home.”

Taxpayers in the Sunshine State got bit hard by the Detroit mob in the 1980s.

Tocco’s pal Louis (Butch) Stramaglia, an alleged Motor City wiseguy, and his baby brother, Frank, owned Vito’s Trucking and Excavating, a company which did a lot of construction work in Florida and spawned a spattering of federal racketeering indictments – alleged to have bilked the state for literally millions of dollars. The Stramaglia brothers were hit with racketeering, tax evasion and theft charges related to sewer construction jobs in Orange and Lee Counties in 1983 and 1988, respectively.

Broward County awarded them a municipal contract to build the Sawgrass Expressway in 1984, a project that went awry fast and ended in more racketeering charges, this time in 1989 and alleging the stealing of nearly two million dollars from county coffers. Found guilty of a 38-count indictment at a 1990 trial and sentenced to 50 years in prison, Butch Stramaglia had the conviction tossed on a technicality and was freed in 1993.

His younger brother, Frank, vice-president of Vito’s, as well as the Stramaglias’ other family business, the Four Bears Water Park, back in Detroit, never made it to trial in the Broward County case. He died under suspicious circumstances three weeks prior to jury selection beginning, found overdosed on cocaine in a Metro Detroit hotel room on New Year’s Day 1990

Frank Stramaglia, 34, had reached out to Florida prosecutors and the FBI, per federal documents, in the days leading up to his death, to discuss possibly cooperating. The autopsy showed that the cocaine Stramaglia ingested the night he died had been cut with a poisonous metallic substance and was 20-times stronger than a normal potency-level.

Mark Giancotti, Stramaglia’s best friend, Four Bears comptroller and fellow Detroit mob associate, was killed on February 10, 1990, after being seen in the presence of local organized crime members in the hours that preceded his slaying . Giancotti was found shot dead behind the wheel of his car in a grocery store parking lot less than 10 miles away from the hotel where Stramaglia was discovered.

No charges have ever been filed in either case, but FBI investigators insist the two deaths were related and suspect they had something to do with their knowledge and/or participation in shady dealings (possibly the laundering of mob money) within Vito’s and Four Bears. Vito’s Trucking and Excavating still operates today. Four Bears has been closed for over a decade.

At least a half-dozen retired or semi-retired Detroit mobsters currently reside in Florida on a full-time or partial basis. Tony Zerilli lived in a retirement community in West Palm Beach until he died of natural causes in March.

Butch Stramaglia, 68, attended Jack Tocco’s funeral last summer. He told the Miami Herald during an interview in 1990 that he was “proud to consider Tocco a friend” and that he’d “rather be friends with a man like Tocco than 20 FBI agents.”

Reputed Tocco protégé, Anthony (Chicago Tony) La Piana, an insurance mogul and alleged current high-ranking figure in the Detroit mafia – a characterization the 72 year-old non-felon denies – has had his name surface in more than one criminal inquiry into the connection between organized crime and organized labor down in Florida (never charged though), most recently in the 2001 racketeering indictment of Broward County union boss Walter (Buster) Browne. Convicted for misuse of labor-union funds three years later, Browne, linked directly to La Piana via FBI surveillance units, walked free from a five-year stint behind bars in 2009.