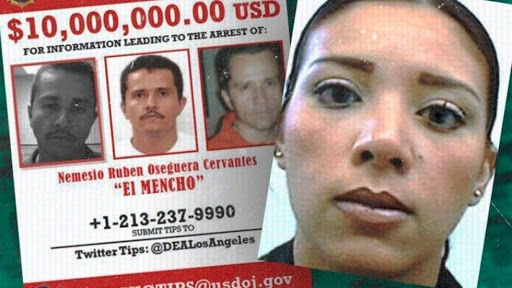 March 18, 2021 – Score one for Uncle Sam in the fight against Mexico’s Jalisco New Generation drug cartel. Jessica (La Negra) Oseguera Gonzales, the daughter of the world’s most wanted Narcos czar, Nemesio (El Mencho) Oseguera Cervantes, pleaded guilty to drug and money laundering violations in a “Kingpin Act” case out of federal court last week. The 34-year old La Negra copped to five separate counts of using businesses in both the United States and Mexico to aid in the operations of her father’s cartel empire.

Per an indictment filed in February 2020, La Negra provided financial support to a series of real-estate investments in the U.S. and legitimate businesses in Mexico, including a pair of sushi restaurants and a tequila company, that her father’s organization funneled drug proceeds though. She was was taken into custody trying to attend a court hearing for her little brother, 31-year old, Ruben (El Menchito) Oseguera, in Washington D.C. El Menchito is behind bars awaiting trial on a separate Kingpin Act case.<

El Mencho, 54, is the biggest drug lord on the globe. He’s been on the run since 2012. The DEA is offering a $10,000,000 reward for information that leads to his capture. Both La Negra and El Menchito are U.S. citizens, having been born in San Francisco.

The highly self-disciplined El Mencho got his start in the Northern California drug trade of the 1980s, doing a federal prison sentence for smuggling before moving back to his Mexico and joining the now-defunct Milenio Cartel. According to DEA documents, El Mencho worked as an enforcer for the cartel’s bosses, the Valencia brothers, eventually becoming the Valencias’ crew boss in Guadalajara. When the Valencias went to prison and the Milenio Cartel fell apart at the start of the 2010s, El Mencho founded his Jalisco New Generation Cartel, moving his headquarters from Guadalajara to Jalisco.