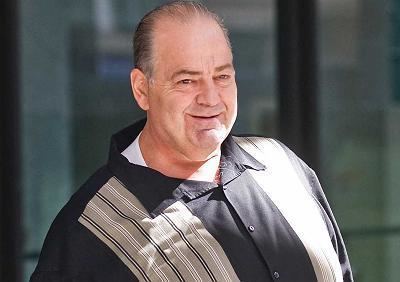 February 19, 2021 – Chicago mafia don Michael (Fat Mike) Sarno is quite skinny these days, his weight trimmed down by a multitude of health maladies. Because of a need for a double knee replacement, he’s confined to a wheelchair. But an unsympathetic federal judge won’t let him off early from a 25-year prison sentence tied to a Chicago Outfit-related racketeering and extortion conviction on medical grounds, at least partially, because he has already received his COVID-19 vaccination shots.

United States District Court Judge Ronald Guzman rejected Sarno’s motion for compassionate release back in September and then denied a renewed motion seeking to have Sarno serve the remainder of his sentence (11 more years) on home confinement Wednesday on a video-conference hearing. Guzman leaned on the fact that Sarno got the second of his two COVID-19 vaccination shots last week at his prison medical facility in Springfield, Missouri, as reason for not granting immediate relief. Further hearings on the matter are scheduled for this spring.

“Mr. Sarno’s health is severely deteriorating and he’s not receiving proper care or proper treatment in the custody of the Bureau Of Prisons,” Sarno’s attorney John Chwarzynski sai

According to the FBI and the U.S. Attorneys Office , Sarno ran the Chicago mob from the spring of 2005 until late 2010, when he was found guilty at trial for fire-bombing a rival video-poker machine company in suburban Berwyn, Illinois. His motion for compassionate release listed chronic obesity, diabetes, lung, liver, prostate, gallbladder and high blood pressure issues for health concerns. Chwarzynski says Fat Mike, once tipping the scales at nearly 400 pounds, weighs less than 200 pounds right now.

Sarno, 63, was mentored in the mob by deceased Outfit capo Ernest (Rocky) Infelise. A young Fat Mike was busted with Infelise’s “Good Ship Lollipop” crew in 1990 and did seven years behind bars for racketeering. He took command of the Cicero regime in the year 2000.

Chicago Crime Commission records describe Sarno as a longtime liaison to the Windy City’s biker gang world. The fire-bombing he ordered in Berwyn was done in tandem with a biker gang figure from The Outlaws Motorcycle Club.

According to court filings and FBI documents, Sarno was given the job of the Outfit’s “acting boss” or “street boss,” duties in the spring of 2005. With no judicial interference, Sarno won’t come home until 2032.