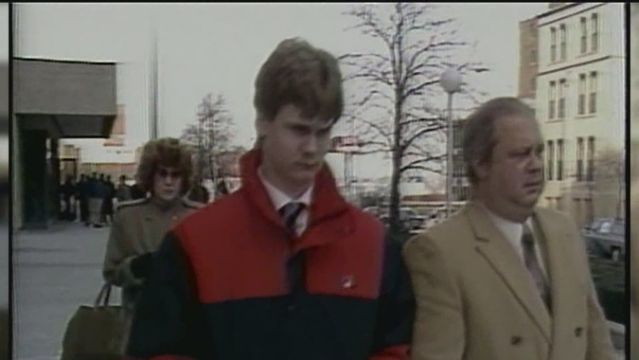 (The Oakland Press & Macomb Daily will be running this story this week, too). DETROIT – Despite his hopes for being free and with his family for this year’s holiday season being dashed by the Michigan State Appeals Court in recent months, long-imprisoned former local teenage drug dealer and underage federal informant Richard (White Boy Rick) Wershe, was still able to make his presence felt back home in his old neighborhood on the eastside of Detroit during the holidays with his annual Christmas food and clothing drive, a tradition he began from behind bars in 2011.

This year’s event donated over $3,000 of cash, winter clothes and festive edibles, like store-bought turkeys, hams, chickens, potatoes and vegetables, to the Immanuel Lutheran Church in Detroit’s Chandler Park neighborhood, walking distance from where Wershe grew up. Going on 28 years of incarceration for a drug bust he took at a routine traffic stop when he was just 17 in May 1987, the 46-year old Wershe, characterized by some as a bona fide political prisoner and without question a modern-day urban legend in the Midwest, is currently the longest serving non-violent offender in the state’s prison system.

Back in September, Wayne County Circuit Court Judge Dana Hathaway announced her intention of resentencing Wershe and for a few weeks, it looked as if he’d have a chance to be free by the end of the fall. But Wayne County Prosecutor Kym Worthy appealed to the state’s appellate court, which eventually ruled in October that Hathaway didn’t have the power to issue a resentence. Wershe’s attorneys have since filed an appeal to the Michigan State Supreme Court. Originally sentenced to life in prison without the possibility of parole, the law Wershe was convicted under (the “650 lifer law”) was thrown off the books in 1998 and he is now eligible for parole – his three times in front of the parole board have all been fruitless endeavors though.

Normally, Wershe donates the money and food he collects from spreading the word via social media and the area press corps, to the Gleaner’s Food Bank in Warren. The 2015 food drive was changed to directly benefit the neighborhood Wershe grew up in on the suggestion of Wershe’s unofficial social media director, Dave Majikowski, a childhood friend of his who aided in staging the philanthropic effort this year. Last Sunday, Majikowski and other Wershe supporters helped deliver and unload two whole truckloads of food, knit hats, gloves and scarfs for the needy to the Immanuel Lutheran Church on the corner of Chandler Park Drive and Dickerson Ave.

Church administrator Betty Clemons was overwhelmed with the generosity and predicts the donations will more than double the amount of people the church will be able to feed and keep warm this holiday season.

“It’s so wonderful, this is the best way he could give back, so many people will benefit from this that wouldn’t have otherwise,” she said. “That kind of gesture is heartwarming.”

Wershe himself called the church on the phone Sunday afternoon from the Oaks Correctional Institute In Manistee, Michigan and spoke to Clemons as the food and clothing were being delivered.

“If I can do something from in here to try and make a difference at this time of the year in the community, anyone can,” he said in an exclusive interview with The Oakland Press. “I love my city, I love my old neighborhood. Whether I’m in here or out there, I’ll always going to try to do whatever I can do to give back.”

The extreme mitigating circumstances surrounding Wershe’s case attracted the attention of Judge Hathaway back in the fall and has Hollywood licking its’ lips in anticipation. Federal records and court filings confirm that Wershe was illegally recruited out of the eighth grade by a federal drug task force, put to work in the treacherous and mostly African-American Motor City narcotics trade from the ages of 14 to 16 as a paid government mole. At the time of his arrest with over 650 grams of cocaine in 1987, he was no longer working for the government.

His swagger, natural charm and penchant for flashy attire, not to mention his incredibly young age, race and a romance he carried on with the Mayor of Detroit’s beautiful, much older niece, made him instant fodder for the press and the victim of a media frenzy that saw tabloid-like accounts of his short rein greatly overstate his importance in the city’s overall criminal hierarchy. Even then-popular tv shows, Miami Vice and 21 Jump Street culled storylines for their respective cop dramas from the Wershe case. Kid Rock name-checked him in his 1993 song, “Back From The Dead,” and spoke at his 2003 parole hearing in support of his release, offering to employ him if he got out.

Two high-profile movie projects about Wershe’s younger days are now in pre-production out in LaLaLand, one at Sony Pictures-imprint Studio 8 being produced by Jon Lesher (Birdman, Black Mass) and Scott Franklin (The Wrestler, Black Swan) and the other at Universal Pictures being produced by Scott Stuber (Ted, The Break-Up). The Studio 8 script was recently named to the prestigious Black List, a ranking of the best currently-unproduced screenplays in Hollywood. That project is hoping for a spring shoot.