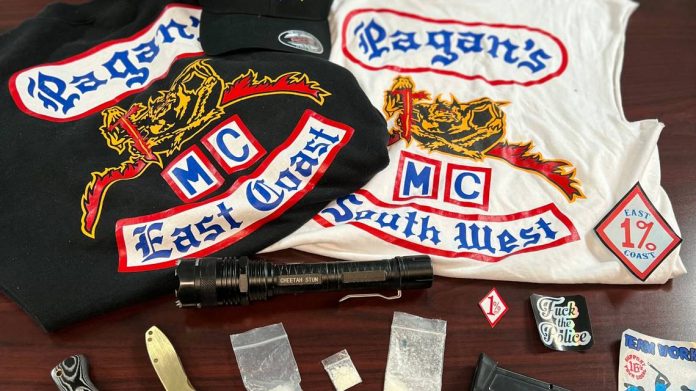 July 18, 2022 — A member of a Rhode Island chapter of The Pagan’s Motorcycle Club was shot outside a chapter clubhouse over the weekend in more violence thought to be tied to The Pagan’s ultra-aggressive “Blue Wave” expansion mandate. This news was first reported by WPRI TV’s Tim White, the area’s preeminent investigative journalist and crime expert.

The victim of the shooting is reportedly from The Pagan’s. The shooting took place in the town of Pawtucket after scrums at a local bar and biker-sponsored charity event in the preceding hours pitting The Pagan’s and their rivals, the Hells Angels.

In 2018, then Pagan’s MC boss Keith (Conan the Barbarian) Richter announced a campaign to spread The Pagan’s brand across the country, intending to take the club from regional powerhouse to national superpower. Traditionally, the Pagan’s influence base has been limited to Pennsylvania, Maryland, Virginia, West Virginia, New Jersey and New York. Richter is described as a magnetic leader and fearless warrior of a biker enforcer. He is headquartered out of Long Island, New Yor

Rhode Island and Massachusetts are two East Coast states Richter and The Pagan’s targeted to grow their turf, per court records. The club’s Fall River, Massachusetts’ clubhouse was shut down by the city back in the spring following flare-ups at a series of Fall River taverns and parks with the Hells Angels, a West Coast-based club with a significant presence out East since the 1970s.

Richter’s so-called Blue Wave initiative has placed the Pagan’s at odds with both the Hells Angels and the Outlaws Motorcycle Club, the crown jewel of the nation’s Midwest biker scene. The Outlaws and Pagan’s engaged in a pair of deadly shootings in Oklahoma and Tennessee, respectively, in the past year. Richter, 63, is currently in prison for gun possession, stemming from a 2021 traffic stop in New Jersey on his way home from a Pagan’s party in the Philadelphia area.

Part of the Blue Wave consisted of Richter ordering all members in specific regions to where their vest-patch rockers with that specific region displayed instead of what particular city or chapter that those members belong to, per court records. The edict began immediately with all the chapters on the East Coast being instructed to switch to simple “East Coast” rockers, these court records show.

Starting in 2020, the Pagan’s began planting their first flags in the Southwest and on the West Coast, opening up chapters in Texas, Nevada, New Mexico, Washington and Oregon. Since their inception in Oakland, California in the 1960s, the Hells Angels have always controlled biker gang affairs west of the Mississippi.