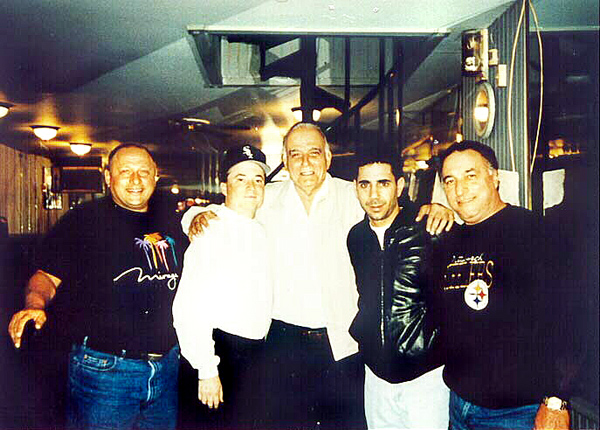 George (Georgie Boy) Borgesi, a seasoned mob heavyweight in Philadelphia, has had a hectic, yet productive last four years or so. When he came out of prison in early 2014, he was on the outs with Bruno-Scarfo crime family leaders and allegedly skating on thin ice. Now, he’s back in the inner circle, according to sources, and presumably positioning himself quite nicely for the future, the thin ice from four years ago turning into what appears to be concrete footing.

Per these sources on the ground in South Philly, Borgesi, the crime family’s consigliere in the late 1990s and early 2000s, not only received a bump up back to a capo’s post last year, but has been chauffeuring childhood friend, Joseph (Skinny Joey) Merlino, the syndicate’s longtime boss, to meetings and social functions over the last few months. The 54-year old Borgesi and the 55-year old Merlino were busted together in a 2000 racketeering case and both did more than a decade in the can. But while the slick, never camera-shy Merlino never relinquished his title as don behind bars, Borgesi was forced to give up his No. 3 role.

Along with his standing, which was further diminished after his eyes and ears on the street, Louis (Bent Finger Lou) Monacello, became a cooperator for the government — resulting in a subsequent racketeering case that he beat from the joint — his ego took a hit too. The formidable racket portfolio he had built up was raided by his cohorts as he sat in his cell, first by another childhood chum, one-time mob underboss Marty Angelina and then following Monacello flipping, portions of it taken away from him and given to Angelina’s successor as underboss, John (Johnny Chang) Ciancaglini, according to sources. These developments were said to have left Borgesi fuming and caused temporary falling outs with Merlino and Borgesi’s own blood, Merlino’s acting boss Joseph (Uncle Joe) Ligambi.

In around 2011 or 2012, Johnny Chang, 61 and today a top Merlino advisor, but no longer official underboss, reportedly assumed control of gambling and loansharking affairs in Delaware County, territory once belonging to Borgesi. At some point before that, Borgesi refused a prison visit from Ligambi, his mother’s 78-year old brother (the heavily respected mob elder statesman responsible for reassembling and stabilizing the Bruno-Scarfo clan in the wake of the family’s rough-and-tumble 1990s), apparently upset over the fact that Ligambi and Merlino sat back and allowed Angelina to try and muscle in on his underworld business interests with him sitting helplessly in prison.

The release of Borgesi back onto the street in January 2014 after he and Ligambi survived two trials in less than a year on the same set of charges, allegedly increased tensions, as Borgesi unsuccessfully demanded physical retribution against Angelina for his transgressions and sought to integrate back into the fold in the Bruno-Scarfo crime family “too fast,” for some family administrators’ liking, per sources with intimate knowledge of Borgesi’s mob dealings. Although, he had gone into prison as consigliere and a former captain, he left as a mere soldier. These set of issues, according to the sources, resulted in multiple “sit-downs” held in late 2014 and through the first half of 2015.

However, by the end of 2015, Borgesi’s fortunes began to turn and his star was on the rise in the South Philly gangland landscape once again. That fall, FBI surveillance units witnessed a dinner celebration informants told them was hosted to honor a crop of new initiates into the crime family, more than half of which were from the Borgesi camp, sources tell Gangster Report, as a gesture of goodwill towards him by Merlino and Ligambi. Then, at some point in 2016, Merlino promoted him to capo, a role he was already fulfilling for all intents and purposes with a growing powerbase, made up of loyalists both in Pennsylvania and New Jersey and other mob locales across the east coast and Midwest, relationships forged as a guest of the government for 14 years.

One local mob insider claims Borgesi was given back portions of his Delaware County turf in the last six months. Numerous insiders cite part of his status increase can be traced back to money he’s spreading around made in deals related to the LED lighting and real estate industries.

The fact that Borgesi has been seen shuttling Merlino around town in recent months bodes well for his public persona in the Philadelphia mob — Merlino’s out on bond facing a current federal racketeering out of New York set to go to trial in January and had been living in South Florida until hurricane damage this past fall to the condo he was residing in combined with preparations for his upcoming trial resulted in his return to South Philly.

“The guy climbed back on top, he’s a grinder…. he knows the game, he knows how to play it and he definitely knows how to politic in this terrain,” one Bruno-Scarfo clan associate said. “People say, ‘he’s a worrier, he looks too much into things,’ but he’s no dummy. He sees the angles better than most in this world. You might not always agree with his approach, he can be a bulldog. At the end of the day, I think it serves him well though.”