“You got a nice ass”

–this is the first of Al Capone’s many quotables to appear on the historical stage. It’s what he said to a girl in a bar one night…right before her brother slashed Capone’s face and gave him the nickname “Scarface”.

Capone in his Prime

“Capitalism is the legitimate racket of the ruling class.”

“I have built my organization upon fear.”

“My rackets are run on strictly American lines and they’re going to stay that way.”

“Public service is my motto. Ninety percent of the people of Cook County drink and gamble and my offense has been to furnish them with those amusements. My booze has been good and my games on the square.”

“This American system of ours, call it capitalism, call it Americanism, call it what you will gives each and every one of us a great opportunity if only we seize with both hands and make the most of it.”

“When I sell liquor, it’s called bootlegging; when my patrons serve it on Lake Shore Drive, it’s called hospitality.”

“Don’t mistake my kindness for weakness, I’m kind to everyone, but when someones unkind to me, weak is not what you’re going to remember about me.” 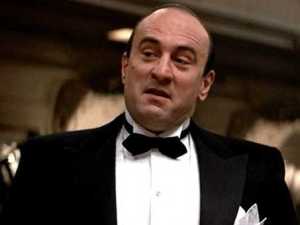 -Robert DeNiro playing Al Capone said this in “Untouchables” but it appears to have been a joke coined in the early 60’s. Later comedians added to the joke by attributing it to Capone. Quote investigator had this to say.

In 1927, Chicago Mayor, and Capone’s chief corruptee, Big Bill Thompson decided he might run for President and started distancing himself from Capone. This began a slow downward spiral that ended with Capone going to Alcatraz. His public statements became increasingly defensive and bitter.

“Let the worthy citizens of Chicago get their liquor the best way they can. I’m sick of the job-its a thankless one and full of grief.  I’ve spent the best years of my life being a public benefactor.”

“You fear death & worse than death, you fear rats if you don’t constantly satisfy them with money. I haven’t had peace of mind in years. Every minute I’m in danger of death. Three of my friends were killed in Chicago last week, that certainly doesn’t get you peace of mind.”

-Capone said this from his self-imposed exile in Florida while fighting the Federal government’s tax case against him.

“All I ever did was sell beer & whiskey to their best people.” 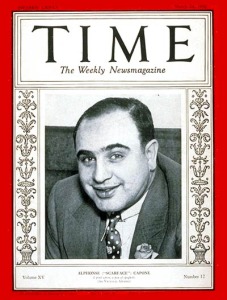 “Why, do you know America’s on the verge of its greatest social upheaval? Communism is knocking at our gates–we can’t afford to let it in! We must keep the American worker away from Red literature & Red ruses.”

-Al Capone on the Communist menace during the early Depression era.

“Racketeer? Why, the real racketeers are the banks!”

–Capone talking to Damon Runyon on the eve of his imprisonment.