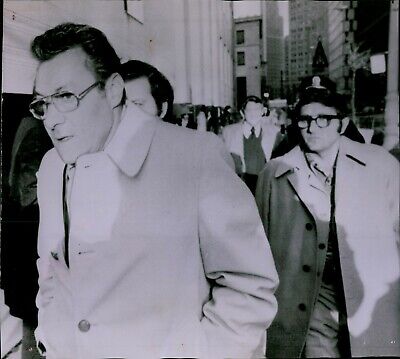 The wildly popular 62-year old Hoffa disappeared 47 years ago this week from a Metro Detroit restaurant parking lot on July 30, 1975 en route to a mob sit down with Detroit mafia street boss Anthony (Tony Jack) Giacalone and New Jersey mob capo Anthony (Tony Pro) Provenzano to settle a union beef between Hoffa and Tony Pro. His body has never been recovered and nobody has ever faced charges in the case.

Stevie Andretta is 85. Gabe Briguglio is 83. They’re allegedly inactive button men in the New Jersey faction of New York’s Genovese borgata. Back in 1975, they were called in front of a federal grand jury in Detroit probing Hoffa’s disappearance.

The iconic Hoffa murder mystery remains an open and active investigation by the FBI office in Detroit, now going full-steam towards a half-century tracking a true-crime case that has transfixed the world since Day 1, yielding tens of thousands of tips and dozens of splashy digs and searches over the past five decades. As recently as two years ago, Andretta and Briguglio refused comment on their reputed involvement in Hoffa’s murder to hardnosed Fox News Channel anchor Eric Shawn, the creator of the Riddle docu-series on the Fox Nation streaming service examining the Hoffa disappearance and the rabid public interest surrounding it.

The FBI suspects Andretta and Briguglio were potentially part of a “clean-up crew” tasked with getting rid of Hoffa’s body after he was murdered a short distance from where he was last seen in Bloomfield Township, Michigan. Investigators believe Tommy Andretta, Stevie’s younger brother, was also a member of the clean-up crew and that Briguglio’s slain brother, Salvatore (Sally Bugs) Briguglio, was part of the “hit team” that murdered the firebrand labor chief over his refusal to retire from Teamsters politics.

Some theorize Hoffa’s body was incinerated at a Detroit sanitation company. Others, speculate that his body was shipped to New Jersey and buried in or near a trash dump in the Jersey City area. Just last month, the FBI searched the former site of the PJP Landfill — once owned by Genovese loan shark and now-deceased Provenzano crew lieutenant, Phil (Brother) Moscato — but didn’t find

Tommy Andretta died of natural causes in 2019 living out in Las Vegas. He did 16 years in federal prison for racketeering before retiring from mob affairs out West.

Gabe Briguglio, sometimes called “Gabe Bugs” or “Sideburns,” was nailed for racketeering in the same case that brought down Tony Pro and the Andrettas. Stevie Andretta and Gabe Briguglio each did six-year prison bids and went to work for the same New Jersey trucking firm following their respective releases in 1983.

Salvatore Briguglio was gunned down in front of a mob social club in Manhattan’s Little Italy on March 21, 1978 about to go on trial with Tony Pro for a cold-case murder from the 1960s tied to a then-upcoming Teamsters election in New Jersey. Informants have told the FBI the Hoffa hit team consisted of Sally Bugs and Detroit mob figures Vito (Billy Jack) Giacalone and Anthony (Tony Pal) Palazzolo.

Billy Giacalone was Tony Jack’s younger brother and a powerful mafia capo in the Tocco-Zerilli crime family in his own right. Palazzolo used his role in the Hoffa execution to gain status and advancement in the Detroit mob, rising from crew boss to capo and eventually to consigliere before he lost a battle with stomach cancer three years ago, per sources.

Tony Provenzano dropped dead of a massive heart attack behind bars in 1988 serving a life prison sentence for ordering the 1961 slaying of Anthony (Tony Three Fingers) Castellito. According to informants, Sally Bugs strangled Castellito to death and got rid of his body by running it through an industrial woodchipper. Like in the Hoffa investigation, Castellito’s remains were never recovered.

Tony Giacalone died of kidney failure in 2001 under indictment in a racketeering case out of Detroit. Giacalone, Hoffa’s longtime contact in the mob, coordinated the details of the Hoffa kidnapping and murder conspiracy, per investigation files and informant debriefings. Him and Tony Pro were related by marriage. Billy Giacalone succumbed to dementia in 2012, holding the Detroit mob’s underboss title in his final years.